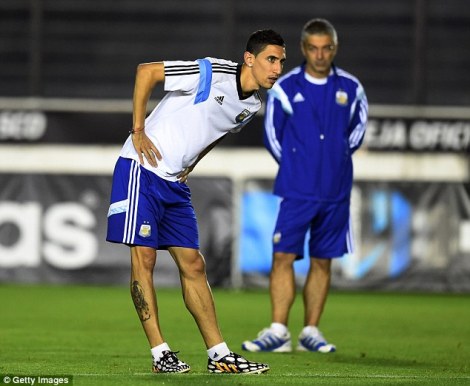 Alejandro Sabella appeared to be ready to throw Ángel Di María back into the action in tomorrow’s World Cup Final as the recovering, Real Madrid midfielder trained with the starting eleven in Rio. However, Di María ended the session limping and it would seem that the thigh injury sustained against Belgium has not healed sufficiently meaning that Enzo Pérez will keep his place.

Di María had responded well to his treatment, including stem cell injections, in his bid to be fit for the Final and given his importance to the side, Sabella was willing to give him every opportunity.

Sabella had said, “We will see on Di María. We have special things planned for him. We will see. I’ll have a better idea after we’ve trained.”

However, after training if the injury has indeed recurred then Di María will undoubtedly sit out the clash against Germany. With the rest of the squad fit, it will mean that Argentina will line up with the same side that defeated the Netherlands on Wednesday.

The midfield with or without Di María will be crucial and this was stressed by Sabella in his press conference, when he revealed that he had been speaking to 1986 World Cup winning coach, Carlos Bilardo.

“We [Sabella and Bilardo] spoke about the importance of midfield, giving solidity to a team. You need to play continuously in the World Cup, and you have to be solid mentally and physically, with the right mindset.”

It is certain that Javier Mascherano will provide this solidity both physically and mentally that Sabella spoke of but it will be a huge test for Biglia and Pérez. So far both players have been exemplary when called upon but a meeting with Germany in the World Cup Final is another matter.

In addition to talking about the German strengths and what will be needed to combat those, Sabella reminded the press of the disadvantage to his side after having a day less to prepare after the Semi Final.

“This is a factor in favour of Germany, undoubtedly. But we’ll give our best, through humility, sacrifice, hard work, being down to earth and giving before receiving. We will give our all so that Argentina can be a champion once again.

There is not much time to wait now but if Sabella can lead Argentina to glory again, the joy that was apparent in Buenos Aires on Wednesday night will pale in comparison to what will occur on Sunday evening.