Lanús first into the Transición final – are El Granate favourites?

Lanús notched a seventh straight Primera win on Sunday afternoon after seeing off the challenge of Aldosivi in La Fortaleza but more importantly El Granate confirmed their place in the Transición final with top spot in Zone Two. Second half goals from Román Martínez and Jose Sand completed a 2-0 win, a remarkable tenth clean sheet from fourteen games, to wrap up the title and the Primera’s form side of 2016 await either San Lorenzo or Godoy Cruz in the final.

Will it be San Lorenzo or Godoy Cruz in the final?

San Lorenzo produced a superb performance to defeat River Plate in the Nuevo Gasómetro and join Godoy Cruz at the top of Zone One after El Tomba had already defeated Quilmes.

Having seen Godoy Cruz win on Friday night, San Lorenzo found themselves in a must-win situation and although Nicolás Blandi’s brace took the headlines, the manner of Pablo Guede’s side’s performance was a ominous sign for their title rivals. Much improved defensively, San Lorenzo now have the foundation for their dynamic passing game to flourish.

Godoy Cruz remain a real threat and are attempting to make history and win a first Primera title but much of San Lorenzo’s side remain from the Copa Libertadores triumph in 2014 and know all about the pressure that goes with a title challenge.

From the Nacional B to the Copa Libertadores?

Not many people would have tipped Lanús for the title but even few, in fact no one, would have predicted Atlético Tucumán making a push for the Copa Libertadores. El Decano’s 2-1 win over Belgrano closed the gap to second-placed Estudiantes to just a point and the unlikeliest of dreams could yet be a reality. Luis ‘La Pulga’ Rodríguez’s injury time winner handed the home side all three points after Cristian Lema had cancelled out La Pulga’s earlier goal and with winnable games against San Martín and Newell’s remaining, Estudiantes cannot afford to slip. Remaining in the Primera is the target for any side that comes up from the Nacional B but only months after promotion, El Decano have far greater ambitions.

Independiente have confirmed that manager Mauricio Pellegrino will be leaving the club after Sunday’s 3-3 draw left El Rojo a long way off their lofty preseason expectations. The decision was made before the point against Gimansia but another failure to win meant Independiente were left nine points behind second and the hope of returning to the Copa Libertadores is pushed back for now.

Given the squad available to Pellegrino and the fact that six clubs were distracted by this year’s Libertadores, Independiente understandably perhaps expected more. To find themselves in sixth and be one of the lowest scorers, among those sides not at the very bottom of the table, can only be regarded as a failure.

Unwilling to give the coach more time, Pellegrino has confirmed his departure and it would appear Gabi Milito is firm favourite to take over. 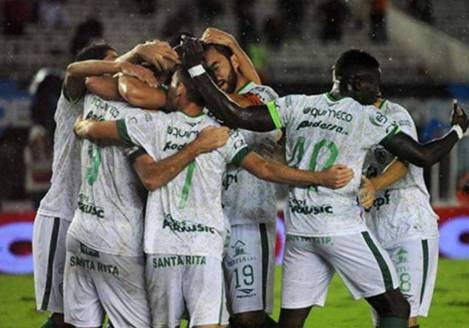 Argentinos Juniors in desperate trouble in their survival battle

Argentinos Juniors produced a listless performance at odds with their current predicament on Friday night as Los Bichos slumped to a 4-0 defeat against Unión. With Sarmiento winning on Monday, time is running out for Raul Sanzotti’s side. It is becoming increasingly difficult to see Argentinos Juniors avoiding the drop given that they have won just once all season and need points from their final two matches. Temperley have been sucked in but maintain an advantage.

All the goals from Round Fourteen….