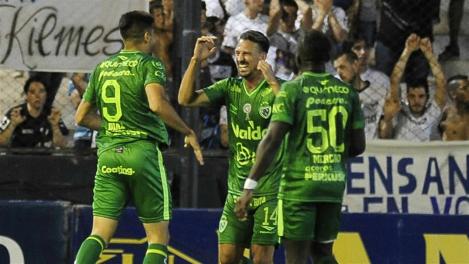 It may come too late but Jorge Burruchaga is certainly making an impact with Sarmiento in the club’s efforts to avoid relegation. The 1986 World Cup winner oversaw an impressive victory over Quilmes on Friday evening to chalk up seven points from a possible nine and despite El Verde remaining in the drop zone, the spirit shown to come from a goal down with ten men suggests, Sarmiento have what it takes to escape.

Quilmes had won their last four home matches so when Gabriel Ramírez fired Alfredo Grelak’s side ahead and Renzo Spinacci was sent off for the visitors before half time, a fifth looked certain.

Whatever Burruchaga said at the break, it obviously worked. Alexís Niz headed Sarmiento level ten minutes into the second half and despite the numerical disadvantage, El Verde dominated.

Leandro Díaz came off the bench and proved instrumental as the striker scored twice on the counter to hand the visitors a vital three points.