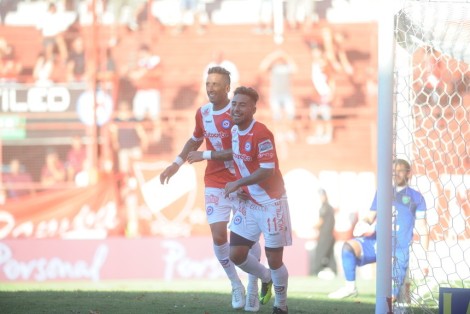 Argentinos Juniors will face sterner tests before the end of the season but after San Martín were reduced to nine men in La Paternal, Los Bichos were able to claim an important win, put further distance between themselves and the relegation candidates and climb into eighth in the Superliga table.

The task for Alfredo Berti’s side was made all the easier due to Marcos Gelabert’s red card after only six minutes when referee Fernando Espinoza punished a flailing arm as a deliberate strike to the face of Javier Cabrera. With the man advantage, Argentinos Juniors were able to dominate and Lucas Barrios went close three times with headers during the first half.

The opener came however shortly after half time with Barrios the provider, rolling the ball into Gastón Machin, who smashed the ball past Luis Ardente.

Things got worse for San Martín shortly after when full-back Luis Olivera was shown a second yellow card and 20 minutes from time, Cabrera crossed for Damián Batallini to sweep in a second.

The red cards may have made life easier for Los Bichos but there were plenty of encouraging signs for Alfredo Berti.

While Argentinos Juniors might be safe from relegation, Olimpo have a great deal of work to do after an eighth defeat of the season against Belgrano in Bahía Blanca.

The home side actually started well and caused Belgrano problems early on but fell behind after 21 minutes. New signing Mauro Guevgeozián was able to roll his defender with ease and lay the ball into the path of Jonathan Ramis for a simple opener.

Olimpo continued to threaten but fell further behind on the hour mark as Matías Suárez volleyed past Jorge Carranza from 25 yards.

Emiliano Telechea pulled a goal in stoppage time, expertly lobbing Lucas Acosta after the goalkeeper has scuffed a goal kick straight to the Olimpo midfielder 30 yards out but it proved to be nothing more than a consolation.