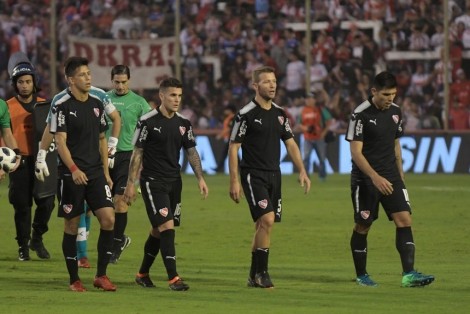 Independiente face a battle to progress in this year’s Copa Libertadores and now know that they won’t be in the 2019 edition, via league qualfication at any rate, after defeat to Unión in Santa Fe.

Unión, unbeaten at home against the Superliga’s best away side with continental competition on the line for both — something had to give.

A game low on quality was ultimately decided a minute after the break when Franco Soldano rose to powerfully head the home side in front.

Independiente never really responded and while El Rojo should have been awarded a penalty late on when Jonathan Bottinelli handled Martín Benítez’s goal-bound shot, in truth the visitors didn’t do enough.

The point was enough for Unión to book a spot in the Copa Sudamericana but means that Independiente down in sixth will need to either win this year’s Libertadores or the Copa Argentina if they are to play in the continent’s biggest tournament next year.

Talleres also look likely to miss out given that a Racing point at home to Colón on Monday would push them out of the top five and that comes as a bitter blow to La T, who up until the defeat to Boca Juniors in April were title contenders.

Already relegated Olimpo were not supposed to provide such stiff opposition but the Aurinegro came from behind to claim a deserved point on their final top flight fixture for a while.

Lucas Mancinelli had already missed from the penalty spot when Santiago Silva gave Talleres a first half lead but with La T unable to find a second, they were punished.

Mancinelli made amends for his earlier miss, pulling Olimpo level and three minutes from time Pedro Silva Torrejón flicked the home side in front.

Goalkeeper Guido Herrera’s stoppage time penalty earned Talleres a point but that looks unlikely to be enough for Libertadores football.

Belgrano saw their hopes of Copa Sudamericana football go up in smoke after a surprise 3-2 defeat to Temperley and with it manager Pablo Lavallén resigned.

A dreadful first half, particularly from the usually impressive Lucas Acosta in goal, saw relegated Temperley open up a two-goal lead. Acosta, caught in possession, gifted Lucas Delgado the opener and then a fumbled cross in a crowded penalty box saw Ignacio Boggino double the lead.

A powerful Jorge Ortíz volley pulled a goal back for El Pirata just after the break but Ezequiel Montagna’s 76th minute strike ended any real hope of a comeback.

Cristian Lema did pull one back from the penalty spot but it wasn’t enough and Belgrano must now focus on next season’s ensuing relegation battle.