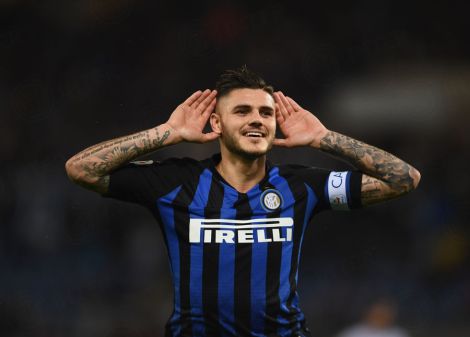 Another weekend of matches has come and gone, Argentinians came up big for their clubs all over Europe as league standings start taking form. Argentina’s biggest star, Lionel Messi, continued to nurse a fracture in his arm as Barcelona routed Real Madrid 5-1 in the season’s first El Clasico. Despite Messi’s absence, Argentinians had an impact in La Liga this weekend.

Jonathan Calleri continued his good form this season scoring his third goal of the campaign in the 51st minute for Alaves to tie up the score at 1-1. Calleri played the full 90 minutes and had five shots on the day. Alaves scored a late game winner to put them in second in the table in La Liga.

Three Argentinians featured for Sevilla as they beat Huesca 2-1. Ever Banega and Franco Vazquez both started the game. Banega made three key passes on the day with an 88% pass success, Vázquez had the assist on the game winning goal to Pablo Sarabia on top of 83% pass success. Gabriel Mercado started the day on the bench but came on as an injury sub in the 24th minute.

Roberto Pereyra added to his goal tally for the season, the Argentinian attacker scored his fifth goal of the season as he put Watford up 1-0 over Huddersfield in the 10th minute. The former Juventus midfielder has scored some good goals in his career but few better than the opener on Saturday as Pereyra cut in from the left, beating five or six defenders before slotting in.

Watford has enjoyed a strong start to the season, Pereyra has played in all 10 of their games as the club sits 7th in the table with 19 points.

Emiliano Sala scored his eighth goal of the season for Nantes in the 71st minute. The goal proved to be decisive goal as Nantes beat Amiens 2-1. He finished the day with two key passes and two shots on top of his game winner. Sala currently sits third in the golden boot race in Ligue 1 behind only Kylian Mbappe and Neymar.

Argentinian goalkeeper Walter Benitez was arguably the best player on the pitch as he started between the posts for Nice. The goalkeeper kept a clean sheet as Nice beat Bordeaux 1-0. The keeper made eight saves on the day.

Angel Di Maria continues to be an important ball distributor for PSG, the winger found Kylian Mbappe in the 65th minute to put PSG up 1-0 in Le Classique. The assist is Di Maria’s sixth of the season, he completed 85% of his passes and had three shots in 79 minutes.

Argentinians had the biggest impact in Italy this weekend. Eight different players took part in five matches throughout Serie A.

This match got off to a quick start as former Inter striker Rodrigo Palacio opened the scoring in the second minute. Palacio made two key passes and an 85% pass completion on the day to add to his first goal of the season.

Argentinian midfielder Lucas Castro opened up his scoring account for the season. Castro scored the game winning goal in the 59th minute to give his Cagliari side all three points. The midfielder made three key passes and a 79% pass completion on top of his goal.

A pair of Argentinians scored goals for both teams this match. Defender Cristian Romero put Genoa up 2-1 in the 67th minute. His fellow countryman, Rodrigo De Paul scored Udinese’s tying goal minutes later in the 70th. Romero was given a red card in the 74th minute after getting a second yellow card.

A trio of Argentinians made the starting XI. Mateo Musacchio in defense, Lucas Biglia in the midfield and Gonzalo Higuain at striker. Musacchio and AC Milan’s defense struggled as they let Sampdoria score two first half goals.

Despite the lacking defensive performance, Biglia and Higuain both had solid games. Biglia was stout on both sides of the ball, completing 88% of his passes and making seven successful tackles. Higuain produced AC Milan’s tying goal in the 36th to put the game at 2-2. AC Milan would go on to score in the 62nd and the game would finish 3-2.

Captain Mauro Icardi was up to his typical antics once again, the Argentinian talisman opened the scoring in the 28th minute to put Inter up 1-0. A Marcelo Brozovic goal would give Inter the 2-0 lead going into half. Icardi came up big in the 70th to seal the victory for Inter and giving himself his sixth Serie A goal of the season. Icardi was his typical dangerous self, he finished the match with three key passes and four shots on top of his goals.