No one could deny the signings of Alexis Mac Allister and Jan Hurtado weren’t promising, after all Boca Juniors were acquiring two of the Superliga’s top young talents, but neither had the star power that supporters expected ahead of their fresh tilt at the Copa Libertadores.

Boca face Athletico Paranaense in the last 16 next week and president Daniel Angelici and sporting director Nicolás Burdisso have busily been trying to add to Gustavo Alfaro’s squad. Weeks of rumour and frustration had seen plenty of speculation but little confirmed business. Until this week when Boca finally announced the capture of Eduardo Salvio from Benfica and followed it with the news that World Cup winner Daniele de Rossi was on his way.

Salvio had been a long-term target for Boca but weeks of negotiations with Benfica had proved fruitless until a breakthrough saw the 29-year-old travel to Buenos Aires with a €7 million deal agreed.

Having featured for Argentina as recently as the World Cup last year and winning five league titles in Portugal and two UEFA Cups when with Atlético Madrid, Salvio brings a pedigree that will excite supporters. The former Lanús winger signed a three-year deal and still one year shy of his 30th birthday Salvio should be showing no real signs of decline just yet.

Whether manager Gustavo Alfaro throws Salvio straight in against Athletico Paranaense remains to be seen but Toto claims he is more than ready to provide a fresh attacking option and has come to La Bombonera to add to his collection of winners’ medals.

“I’ve been training, so I’m ready and available to the manager,” Salvio explained after some speculation surrounding his medical prior to signing.

“Being able to wear the colours, the shirt and defend the badge is a source of happiness and great pride. I come to win everything, the Libertadores and the championship. That’s the challenge I give myself.”

If that weren’t enough, Daniel Angelici confirmed that everything was agreed to bring former Roma captain Daniele de Rossi to the club with the veteran midfielder due in Buenos Aires over the weekend to complete a deal which is ‘99% done’.

“To have a world champion say that he wants to end his career here fills me with pride,” beamed Angelici after presenting Boca’s trio of already completed signings.

Former Roma teammate Nicolás Burdisso played a key role in persuading De Rossi and the 35-year-old is expected to sign a deal at least until the end of the year. The 35-year-old, who will leave boyhood club Roma after 18 seasons and a record number of appearances only bettered by Francesco Totti, could be available to link up with Alfaro’s squad on Monday.

However, a debut for De Rossi won’t be able to follow immediately until Boca resolve the number of foreign players in the squad. Colombian full-back Frank Fabra gaining Argentinian nationality after three years in the country could be one administrative way around this but otherwise Alfaro will need to authorise a sale.

Forward Sebastián Villa linked with a move to Real Betis would be one possibility but the far more likely outcome will be the sale of Uruguayan Nahitan Nández to Serie A side Cagliari. Boca had been reluctant to accept the Italian club’s bid of around €15 million but the arrival of De Rossi in a similar combative midfield role could hasten the 23-year-old’s departure. 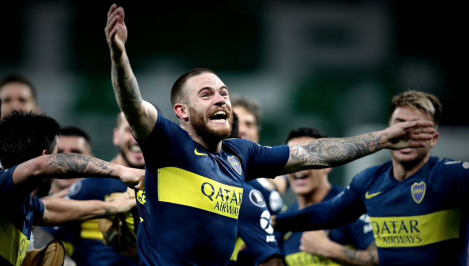 Nández is said to be keen on a move to Europe after two successful years with Boca and his agent Pablo Bentancur has suggested that a deal with Cagliari is all but agreed.

Angelici remains tight-lipped on Nández’s future and the midfielder isn’t the only potential departure.

Darío Benedetto is thought to be close to a €16 million transfer to Marseille which despite being under the striker’s release clause may still be enough with the 29-year-old eager to test himself in Europe at what could be his last chance. Angelici admitted this was a possibility and in response said that it would prompt Boca to go back into the market for a number nine.

A number of the targets linked with the club earlier in the window are no longer available and it would appear the two frontrunners at present are Mauro Boselli, who began his career at the club, or Lazio’s Ecuadorian centre forward Felipe Caicedo.

Not that Boca are in a position to need to raise funds following the relatively recent sales of Wilmar Barrios, Lisandro Magallán and Leonardo Balerdi, there remain rumours surrounding the futures of Cristian Pavón and Agustín Almendra.

Former manager Guillermo Barros Schelotto, now with LA Galaxy, had hoped to take advantage of Pavón’s slump in form with an offer less than half of what Boca were demanding one year ago but it was deemed insufficient by Angelici and the Boca president claims there have been no offers for Almendra.

That may well change but with the Copa Libertadores starting back up again next week, Boca will be loath to make many more significant changes.