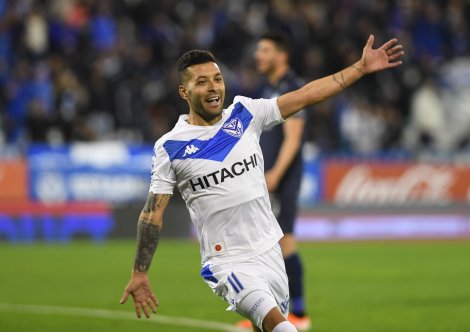 After a slow start to the campaign, Vélez Sarsfield have now won three consecutive games as Lucas Janson’s first half goal was enough to see Atlético Tucumán in Liniers.

Gabriel Heinze’s side may not yet be at their absolute best but it was too much for an Atlético side also struggling to maintain the form of last season.

Nicolás Domínguez had already forced Alejandro Sánchez into action when Vélez led after 18 minutes, Lucas Janson getting on the end of Maxi Romero’s header back across goal to nod in unmarked.

Unable to extend their lead, Vélez had to remain cautious to the threat posed by Atlético but any half chances the visitors would create were largely self-inflicted errors from Heinze’s side.

From one such weak clearance by goalkeeper Lucas Hoyos, Atlético almost snatched a point as Augusto Lotti blazed over the crossbar but Vélez held on for another important win.

The same couldn’t be said of Aldosivi, who allowed Patronato to claim a late draw in Mar del Plata, a result that may yet have implications in the relegation battle for both sides.

It was the least that the visitors deserved having created the clearer chances and perhaps feeling they should have had a penalty before eventually forcing their equaliser.

Sebastián Rincón’s deflected close-range finish gave Aldosivi the lead midway through the second half but it was Patronato who finished the game far stronger. Gabriel Ávalos clipped the crossbar, referee Patricio Loustau waved away a very strong claim for a spot kick after a handball and it wasn’t until the 89th minute that Cristian Tarragona poked the ball in at a free-kick.

Both sides remain outside the relegation zone but there isn’t a great deal of breathing space and every point will be important in what is gearing up to be a very tight race.