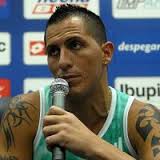 Following his arrest yesterday (see previous post) Pablo Migliore has been moved to the high security prison in Ezeiza, rather ironically where he used to visit ex-Boca barra leader, Rafa Di Zeo. Migliore has refused to testify and will be held despite his lawyers asking for his release, this could take up to 10 days to be authorised. Meanwhile, Maximiliano Mazzaro, the Boca fugitive, around who this concerns is said to be “saddened” by Migliore’s arrest. His lawyer claimed that the wanted Boca barra said that he has not had any contact with Migliore and his arrest is unjust.