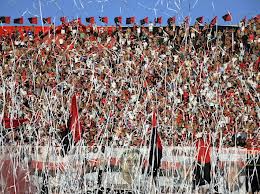 Newell’s celebrate qualifying for the next round

Newell’s Old Boys qualified for the next round of this year’s Copa Libertadores last night, making it to this stage for the first time in 7 years. However, they didn’t make it easy for themselves. Already on the brink of qualification before last night’s game, Newell’s knew that only a huge swing in goal difference would prevent them from going through. The win in Paraguay, against group winners, Olimpia would not be important but preserving the goal difference would be. Losing the game 4 – 1 was a scare for the Rosari based team but Universidad de Chile’s narrow 3 – 2 win over Deportivo Lara meant that Newell’s held on to second spot. FOR REPORT AND HIGHLIGHTS…..

A fairly even opening in which Newell’s were guilty of missing some excellent chances was eventually punished when Olimpia broke and goalkeeper, Nahuel Guzman brought down the onrushing striker. With under 30 minutes gone, Newell’s were down to 10 men and a goal down after Juan Manuel Salguiero converted the resulting penalty.

Newell’s did get back into the game and forced an equiliser, a well taken finish from Milton Casco but from then on Olimpia were in charge. The second half saw Salguiero grab his second of the game, in between a brace from fellow striker, Juan Carlos Ferreyra. The 4 – 1 scoreline damaged the goal difference but with Universidad de Chile managing only a 3 – 2 win in Venezuela, against Deportivo Lara, it was enough.

Newell’s join Boca and Velez in the next stage but as group runners up will face one of the group winners and a potentially difficult tie.