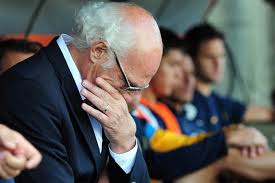 The earlier kickoff on Saturday undoubtedly brought the major talking point as Boca Juniors were humiliated in San Juan by San Martin, losing 6 – 1. They will point to Copa Libertadores commitments and injuries but there is no escaping a defeat which is the second worst in the club’s history.  Later, in another of the Buenos Aires clasico’s, Racing easily beat San Lorenzo. Despite a wonderful opening goal to give San Lorenzo the lead, when Hector Villalba ran the length of the pitch, Racing ran out comfortable 4 – 1 winners. And in the final game of the day, league leaders Lanus beat All Boys courtesy of a last minute winner from Silvio Romero. All Boys will be so disappointed to leave Lanus with nothing after a good performance but ultimately Lanus did what was necessary and like all potential champions grabbed victory from the jaws of defeat or a draw. REPORTS AND GOALS HERE….

Only a 7 – 1 defeat at the hands of Independiente in 1940 is worse than the 6 – 1 thrashing that Boca were dealt on Saturday when they travelled to San Juan. Boca have not won since the opening weekend and today they were given a torrid time by a team destined for relegation. Colombian striker Hunberto Osorio, in particular, was the tormentor in chief and managed to come away with a hattrick. Uncharacteristicly, but all too familiar this season under Carlos Bianchi, Boca defended atrociously. Osorio put San Martin ahead after only 2 minutes and it set the tone for the rest of the game. Jorge Luna doubled the advantage after 20 minutes and although Santiago Silva pulled one back from the penalty spot the two goal advantage was restored before the break by Lucas Landa and then increased in stoppage time when Osorio headed his second of the game. Boca’s frail defending continued after the break and it wasn’t long before Osorio could complete his hattrick, exchanging passes on the edge of the box before slotting past Oscar Ustari. There was still time for Sebastian Penco to nod home from a free kick and complete San Martin’s famous victory.
Boca must now regroup before their midweek trip to Mexico to face Toluca in the Copa Libertadores. They haven’t won in the league since the opening weekend and have obviously written it off but they will not to improve dramatically if they are to challenge for other honours. They have already qualified from their group in the Libertadores but will be keen to get the best seeding possible for the next round and avoid a tricky knockout tie.

Racing put in their best display of the season to crush rivals San Lorenzo in the Nuevo Gasometro. Despite getting off to a flying start, when Hector Villalba ran from one end of the pitch to the other before finishing past Sebastian Saja, San Lorenzo were always second best. It took only 3 minutes for Racing to be back level, Bruno Zuculini volleying his first of the day. His second coming not long before half time in far scrappier circumstances, Zuculini being on hand to force home after a corner had caused panic in the six yard box. After the break, youngster Rodrigo De Paul finished confidently before another youth product, Luciano Vietto added the fourth.
Racing climb in the table but remain some way off the pace of leaders Lanus. For San Lorenzo, the table doesn’t make pretty reading and there remains a slim chance of relegation. The only good news from tday being the return of Leandro Romagnoli after a long lay-off through injury.

Lanus continue their title challenge after a hard fought 2 – 1 win over a resiliant All Boys side. Lanus were the best team in the first half and deservedly led through striker, Mario Regueiro’s 20th minute opener. However, after a tactical reshuffle at half time All Boys dominated the second half and were unlucky not to be level earlier, having a goal disallowed, somewhat harshly, for a push. However, they got their reward after 67 minutes when Angel Vildozo pounced on some hesitant defending managed to head the ball over Agustin Marchesin in the Lanus goal. It looked like a further two points dropped for Lanus in their bid to win the Tournament Final but in the 90th minute, forward, Silvio Romero expertly curled home the winner from just outside the box.
The result gives Lanus a 5 point cushion at the top of the table but River and Newell’s can close the gap to just 2 with wins tomorrow.