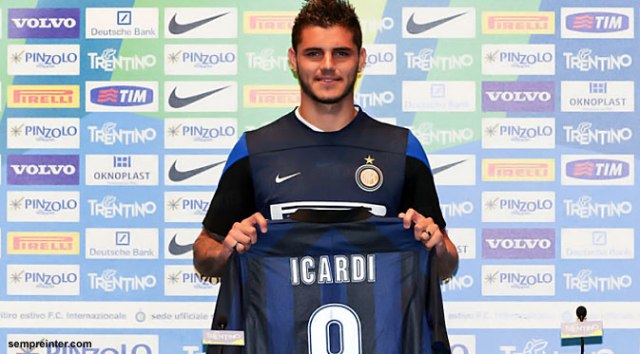 With Lionel Messi injured for the forthcoming World Cup Qualifiers, Argentine coach, Alejandro Sabella has called upon Inter Milan striker, Mauro Icardi for his first International cap. Icardi has started the season in impressive fashion in Milan and amid rumours that Italy were going to tempt Icardi to opt to represent his adopted nationality, Sabella and Argentina have moved quickly to end that possibilility. FOR THE FULL SQUAD SEE MORE….

For some time, Mauro Icardi has been the subject of specualtion over his international career. Born in Rosario, Icardi moved to the Canary Islands at the age of 6 and is eligible to represent Argentina, Spain and Italy. A prodigious talent, Icardi was snapped up by Barcelona at a young age and progressed through the youth sides but with first team opportunities limited he moved to Sampdoria. A successful sell at Sampdoria followed resulting in a big move in the summer to Inter Milan. Icardi’s progress has continued and so it comes as no surprise that Italy made noises that they would be keen to add Icardi to their ranks.

However, with Lionel Messi out injured and a space among the striking ranks in La Seleccion, Sabella has taken the oppportunity to call Icardi for his first full cap. The 20-year-old striker has previously said that, “I’m Argentine, I feel Argentine, and I’ve always dreamed of wearing the shirt of my nation. To actually do that would be the maximum for me.” And so it would appear that Icardi dream is coming true and Argentina avoid the risk of a top talent being snatched away.

The provisional squad is as was released a few days ago but will be made final on Thursday. The team has already qualified for the World Cup in 2014 but will play Peru in El Monumental on October 11th before taking the short trip to Montevideo to face Uruguay on October 15th.