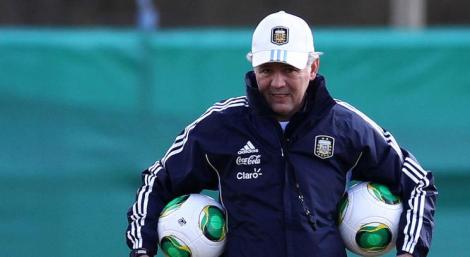 Alejandro Sabella has been looking at some new systems in training over the past couple of days with tomorrow night’s match with Uruguay in mind. Qualification and top spot in the group are confirmed and it was widely expected that several fringe players would feature in Montevideo but Sabella is looking at playing a 5-3-2 system.

Further little injury concerns have limited Sabella’s options as Sergio Aguero, Fabricio Coloccini, Rodrigo Braña and Angel Di Maria have all not been risked ahead of the trip. With injuries and the worry of other players picking up suspensions, Sabella is expected to call upon a number of his squad players.

The 5-3-2 formation will be a big opportunity for Erik Lamela as he will be playing in his favoured central position and Argentina will be looking to him to aid the creativity missing from so many absences.

Neither side are anywhere near Argentina’s full strength line-ups so a hungry Uruguay will fancy their chances.

Interestingly, Mauro Icardi doesn’t feature in either despite his call-up. His introduction from the bench would surely be planned as Sabella spoke favorably about the youngster and his ability to replace Gonzalo Higuain.