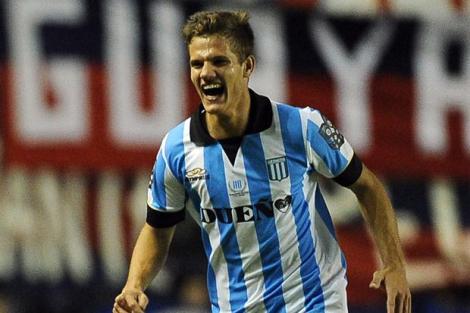 Bruno Zuculini could be on his way to Manchester City

Manchester City are understood to have beaten a number of top European clubs to the signing of 20-year-old, Racing Club midfielder, Bruno Zuculini. With his contract running down at the Avellaneda side where he started his career, City are believed to have wrapped up a deal for as little as £1.5 million.

With Zuculini holding an Italian passport the deal will not be disrupted by any work permit issues and although it is unclear whether the player will stay in Argentina for some more time, it appears City will have his signature.

A classy defensive midfielder, Zuculini has gone on to play 79 times for Racing since making his debut back in 2010. Comfortable on the ball and capable of bursting forward from deep, Zuculini has scored 10 times for the first team, including the opening goal in last weekend’s 2-0 win over Godoy Cruz.

His older brother, Franco was another of Racing’s youth products but is now playing in Spain for Real Zaragoza.

For the cut price it represents a good deal for Manchester City but with the depth of talent in their squad I would not expect him to be challenging for a first team place any time soon. Perhaps a deal that saw him continue to develop at Racing would be beneficial for the time being.