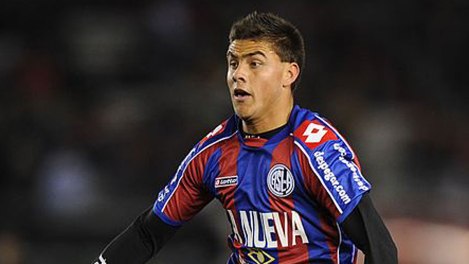 San Lorenzo’s impressive run in this year’s Copa Libertadores has seen El Ciclón on the brink of the biggest achievement in the Buenos Aires giants history but has also seen a number of their players attract interest from elsewhere. The latest is 20-year-old striker, Héctor Villalba, who Feyenoord are reportedly discussing a potential $3.5 million move.

Reports in Argentina suggest that officials from Feyenoord have travelled to Buenos Aires to discuss the transfer of Héctor Villalba. A statement from San Lorenzo has confirmed that no official offer has been submitted as yet but it is known that the 20-year-old striker has a $3.5 million buy-out clause.

Any deal is likely to be delayed in any case until after the Copa Libertadores Final, as San Lorenzo have negotiated with several other players. The Final, played over two legs, takes place on August 6th and 13th, two weeks before the European Transfer Window closes which would leave plenty of time for any transfer to be completed. However, Feyenoord appear keen to finalise any deal before that and remove the risk of any other potential suitors moving in.

Villalba’s transfer to Europe is inevitable at some point. The stocky, powerful striker is blessed with lightening pace and is capable of the truly spectacular. It was one of these moments which catapulted Villalba into the limelight, when in the Torneo Final 2013 in the clásico against Racing Club, the 18-year-old Villalba burst from his own half through the heart of the Racing side and thumped the ball into the net for one of the goals of the season.

Since then, Villalba has perhaps been over-shadowed slightly by another of San Lorenzo’s youngster, Ángel Correa, who recently completed a move to Atlético Madrid. Villalba perhaps does not have the vision or creativity of Correa but as a pacy-direct striker, his potential is huge.

For this reason, Feyenoord have identified him as a possible target given their need to strengthen the attack after the sale of Graziano Pelle, who was sold to Southampton earlier in the window.

San Lorenzo will be loathed to lose another key-player but if he can help to win the Copa Libertadores before departing it would soften the blow.