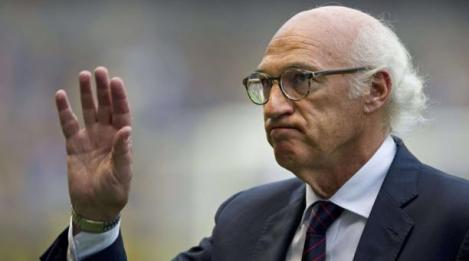 There is no questioning quite how poor Boca Juniors are at present, with many people looking at the current squad as one of the weakest in the clubs illustrious history. With results going from bad to worse, President, Daniel Angelici confirmed that coach, Carlos Bianchi would be relieved of his duties. The reputation of club’s most successful coach could not save him this time and the ever-unpopular Angelici wasted no time in showing Bianchi the exit door and less than 24 hours later has appointed one of Bianchi’s former players, Rodolfo Arruabarrena.

Matters on and off the pitch for Boca Juniors have not been running smoothly for some time now, which for the most part is why Daniel Angelici turned to Bianchi in the first place. In Argentina, more than most countries, when a club is in crisis the urge to bring back a much-loved and successful former great is strong.

And so when things started to go awry under previous coach, Julio César Falcioni, Angelici showed no signs of hesitation in bringing Bianchi back for a third spell in charge. After all, Bianchi is Boca’s most decorated coach having won three Copa Libertadores titles between 2000 and 2003, four league titles and victories over Real Madrid and AC Milan to claim the World Club Championship.

However, since his reappointment in December 2012, there has been no sign of improvement, in fact it could be argued they have regressed.

With two years to mould the squad, Boca now appear to have one the weakest rosters in their history and the performances match that unwanted tag. The previous championships have relied on Bianchi’s old ally, Juan Román Riquelme, but after he opted to return to Argentinos Juniors, the side who have started this year’s Torneo Transición appear rudderless and devoid of any spark.

Four woeful performances have brought a solitary win, albeit a rather undeserved victory away to Belgrano, but more damaging have been the home defeats to Newell’s Old Boys and the first ever loss in La Bombonera to Atlético Rafaela. Add in the Copa Argentina defeat to Nacional B side, Huracán and it is easy to see why Boca and Angelici might be thinking that Bianchi’s return was a mistake.

However, given Bianchi’s status it might be argued that this could have been handled far better. Leaked stories from the club reported approaches to high profile coaches such as Alejandro Sabella, all while Bianchi remained in office. For a man who oversaw such a golden era of Boca Juniors’ history, a little more respect might have been in order.

Regardless, on Thursday evening, Daniel Angelici confirmed that Carlos Bianchi would be leaving Boca with immediate effect.

“This was the hardest decision, and the toughest day I have had since I was elected … (and) we hope the fans understand that the decision was made with the best intentions for the club in mind.”

“He wanted to go on, he felt strong. I listened to him, met with him after seeing him at my house, and we felt the need to make this urgent decision before Sunday. We had the chance in June to terminate his contract, but we believed he could turn around the situation.”

On the subject of growing discontent among the supporters, Angelici added, “I would prefer that the fans insult me and not the players.” Amidst the growing number of concerns for Boca’s president, this is not one of them. With Boca’s weak financial position, the loss of talisman Riquelme and the side’s current plight, disdain shown towards Angelici is the one certainty.

One thing that was obviously not so uncertain was the man charged with replacing Bianchi. Although Angelici stated, “We will be meeting with a few of the candidates tomorrow, but we expect to announce Boca’s new coach tomorrow (Friday), there will be no transition period. We are going to bring in a coach who can turn around the poor results we have been seeing.”

True to his word and less than 24 hours after confirming Bianchi’s exit, Boca not only announced Rodolfo Arruabarrena as the new DT but the former Boca defender held his first training session. 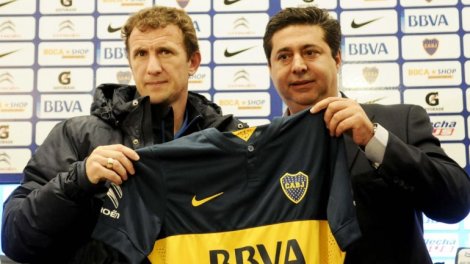 Rodolfo Arruabarrena spoke of the responsibility and pride of taking over as coach of Boca, the side with who he played 178 times for between 1992 and 2000, winning the Copa Libertadores under his predecessor, Bianchi.

The 39-year-old coach has a strong connection to the club, having come through the youth ranks and been part of a hugely successful Boca side before leaving for Villarreal but is relatively untested as a coach having just two short spells with Tigre and Nacional of Uruguay on his CV.

There is a curious symmetry here with arch-rivals River Plate. They too needed to replace a legendary coach in Ramón Díaz, albeit in rather different circumstances after he had just captured the Torneo Final, but this time they turned to a young manager with the necessary status within the club as a player. Marcelo Gallardo, less than a year younger than Arruabarrena has proven to be a successful appointment so far, both won the Libertadores with their respective clubs and both come back to their spiritual homes after managing Nacional.

However, the task facing El Vasco is a daunting one. Boca’s starting eleven is weaker than ever and with Angelici reportedly needing to pay Carlos Bianchi a whopping $3 million severance, the purse strings are likely to be tighter than ever.

In his opening press conference, Arruabarrena was confident in the squad’s ability but also stressed that only performances and results count for anything. Sunday evening in La Bombonera, these words will be put to the test as league leaders and the only side still with a 100% record, Vélez Sarsfield visit La Bombonera.

Obviously it will be too soon to charge the new coach but another heavy defeat at home will create an even more unsettling atmosphere in La Boca.