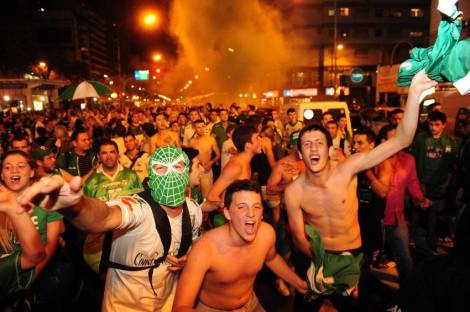 Thousands of Ferro Carril Oeste supporters took to the streets of Caballito on Monday to celebrate the club’s bankruptcy being lifted after 12 years. Since 2002 when the judgement was made over a debt of 53,000 pesos, Ferro have slumped into decline: languishing outside the top flight, a fraction of the members numbers and no control over their finances. The latest ruling allows the club to resume control and hold elections as a new era begins for one of Buenos Aires’ big clubs.

The decision by judge, Margarita Braga to lift the bankruptcy was understandably cause for great celebration in Caballito. In the 1980s, Ferro were crowned Primera champions twice and had over 50,000 members and so the decline that has seen them not only be declared bankrupt but also fall to the third tier of Argentine football at one point and now back to the Nacional B, has been miserable.

With bankruptcy lifted, Ferro will once again be able to control their own fate as there will no longer be controls over the club’s finances and assets. Elections will be organised shortly as Ferro seek to start a new with a genuine feeling of optimism.

The outstanding debt in 2002 was 53,000 pesos but at around the same time, the financial difficulties in Argentina saw the number of socios (members) decline dramatically meaning Ferro was unable to generate sufficient income to pay off these debts.

So how are Ferro now in position to pay their way out of this position whilst still playing in the Nacional B?

The club received a percentage from Federico Fazio’s transfer to Tottenham Hotspur from Sevilla, perhaps as much as 1 million Euros and so with this welcome boost, several creditors have been able to be paid.

With elections due in the coming months supporters will be hoping that their club can recapture some of it’s former glory.