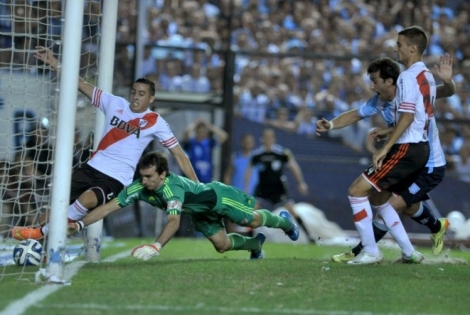 The gamble that Marcelo Gallardo took by taking a weakened River Plate side to face title contenders Racing Club in El Cilindro certainly did not pay off and now it is La Academia who have the upper hand with just two matches to play. Just three days after the gruelling Copa Sudamericana Semi Final against Boca Juniors and four days ahead of the second leg, Gallardo opted to rest several of his first team and the young side that he selected to face Racing came up just short.

In spite of the changed lineup the margins in the match were minimal and the only goal was a mixture of poor defending and a huge slice of luck on Racing’s behalf. A low cross from the right caused confusion in the River penalty box and as the ball bobbled around it fell to Diego Milito, his shot was blocked by Marcelo Barovero but deflected back against the tangled legs of Ramiro Funes Mori and rolled back into the net. The despairing dives of both Barovero and Funes Mori could not prevent the ball trickling in and Milito sprinted away in celebration.

Although the goal came after only quarter of an hour, River lacked any incisiveness and failed to carve open many meaningful opportunities. In desperate need of a goal, the selection of Lucas Boyé and Sebastián Druissi as the two pronged strike force looked like even more of an error. Fernando Cavanaghi made his return from injury late on in an effort to force an equaliser but it was to no avail and in the final moments it was Racing who could have ensured victory.

With two matches remaining, it is now Racing who must be considered favourites, despite River leading for virtually the entire campaign. Having sacrificed this advantage the pressure on Gallardo and his side to defeat rivals Boca on Thursday night is huge. After all the plaudits they have received, there is now a very real possibility that the thin squad will fall at the final hurdle in both competitions, defeat to Boca in a cup semi final is unthinkable.

In the league, it is true that River have the easiest run in, given that they are at home to Banfield and then away to Quilmes but who knows what mental state they could be in IF Boca do manage the victory on Thursday. Racing have the slightly more complicated fixtures, away to Rosario Central before ending with Godoy Cruz visiting the Cilindro, and if any side in Argentine football could find a way to undo the hard work they have done it is Racing. Lanús sit level with River and so must also be considered but they without question have the toughest job, with a match against Boca and a trip to Rosario to face Newell’s.

Racing have taken a huge step towards their first title since 2001 but there is plenty of football still to play and perhaps a few twists remain.