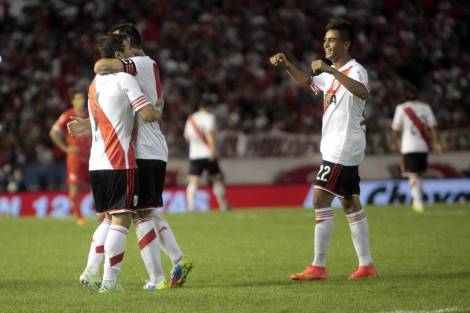 River made light work of defeating Independiente in Mar del Plata on Tuesday night and in the process won the friendly tournament to lift the Copa de Oro. Goals from Fernando Cavanaghi, Rodrigo Mora, debutant Camilo Mayada and Leonardo Pisculichi gave Gallardo’s side a victorious start to 2015.

It may have only been a friendly and River’s side was certainly not the starting eleven that Gallardo will draw upon most often this season but the match was all too familiar to the Torneo Transición.

The two sides appeared fairly evenly matched, albeit Independient, still exhibited their trait of being rather dangerous going forward and rather haphazard at the back, and both sides created presentable opportunities.

The deadlock was broken midway through the first half and it was one of those Independiente defensive mistakes which allowed it. Emiliano Papa, making his debut at left back made it far to easy to Augusto Solari to cross and then Víctor Cuesta missed his clearance allowing Cavanaghi a simple tap in.

Independiente immediately spurned a glorious chance to equalise with Francisco Pizzini miscueing eight yards out and before half time Jesús Méndez was shown a second yellow card which proved decisive.

The second half was all River and with the man advantage and some very useful substitutions they ran riot. Rodrigo Mora smashed in from the corner of the penalty area before Camilo Mayada poked in a third and Leonardo Pisculichi stroked in a fourth.

With ten men, Independiente had no answer and as the fourth goal went in, the fans reminded Jorge Almirón of his decision to let Rolfi Montenegro train with the reserves. It remains to be seen if this proves to be a good decision but it is clear that the supporters will not forget this if the results are not positive.

It is difficult to draw too much from a preseason friendly and certainly one where Independiente played with ten men for the entire second half but the recruitment policy thus far does not appear to have addressed the issues of last season.