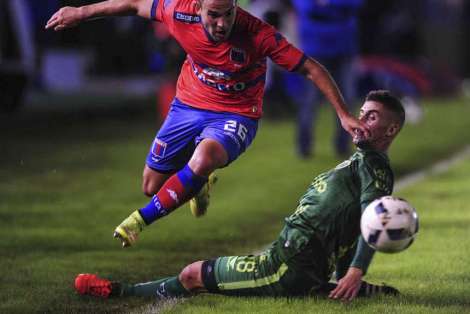 Sarmiento have been much improved in recent weeks under Ricardo Lombardi but remain in the midst of a relegation battle after slumping to defeat against Tigre on Monday evening. Pedro Troglio’s side were fully deserving of their 2-0 victory as Lucas Janson and Federico González proved too much for the visitor’s defence. A wonderful through ball by González released Janson to slot in the opening goal after half time and Jorge Rodríguez doubled the lead with a beautifully controlled strike from the edge of the box. A second home victory for Troglio displayed signs of promise while Sarmiento are left nervously looking at the descenso table. Only Argentinos Juniors stand between El Verde and relegation back to the Nacional B.

A week after losing in Temperley, Quilmes managed to exact revenge by the same 2-0 scoreline when the two sides met at the Estadio Centenario. Ezequiel Rescaldani’s smart close range finish shortly after half time gave the home side the breakthrough and Sebastián Romero wrapped up victory three minutes from time.