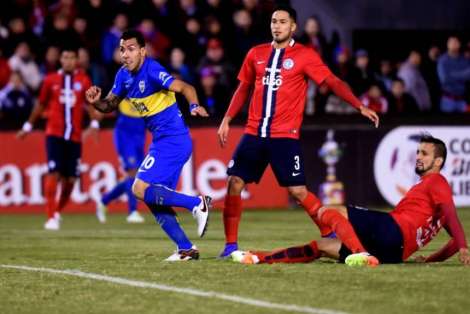 Carlos Tevez inspired Boca Juniors to a 2-1 win over Cerro Porteño in Asunción to take a comfortable lead back to La Bombonera next week for their Copa Libertadores last 16 second leg.

Despite missing several key players, Boca were good value for their win and after a bright opening took the lead after 28 minutes when Carlos Tevez nodded in Marcelo Meli’s right wing cross. Guillermo Barros Schelotto’s side still looked the more dangerous and doubled their advantage on the hour mark when Tevez thread a pass into the path of Nicolás Lodeiro for the Uruguayan to skip around Anthony Silva and roll the ball into the net.

At two-nil the tie was all but over but a late penalty converted by Cecilio Domínguez provides Cerro Porteño with a glimmer of light.

The two sides meet next Thursday in La Bombonera and although Boca must remain alert, Guillermo Barros Schelotto will have seen little from the Paraguayans to overly worry him.