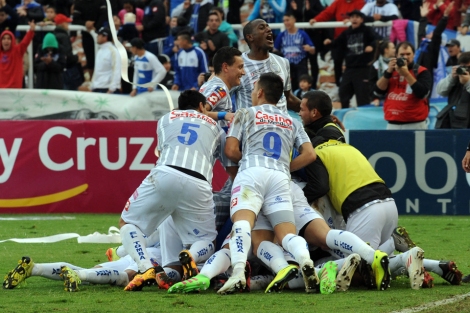 While Lanús confirmed their place in the Transición final with three games to spare in zone two, San Lorenzo and Godoy Cruz ensured that their bids to face El Granate will go to the final day.

With both sides kicking off simultaneously it was Los Cuervos that took an early advantage when they snatched the lead away to Colón inside two minutes. Julio Buffarini’s right wing cross was helped on at the near post and the in-form Nicolás Blandi headed the visitors in front for his fifth goal in four games.

Godoy Cruz could not afford to drop any points but on the stroke of half time, they too led. With virtually the last kick of the first half, Pol Fernández curled a magnificant free-kick past Juan Carlos Olave and sparked wild celebration.

El Tomba held on for the invaluable three points with Belgrano having Mario Bolatti sent off late on and over in the Cementerio de Los Elefantes, San Lorenzo ensured victory when Martín Cauteruccio smashed a second on the break.

With a game remaining, the two sides are tied on 33 points at the top of zone one but with Godoy Cruz holding the advantage of a far superior goal difference. San Lorenzo host Banfield while El Tomba travel to San Martín for their designated clásico knowing that victory would guarantee a place in the final.