It was all too easy for a much changed Argentina side in Seattle as Bolivia provided almost no opposition in their final group D match on Tuesday evening. La Albiceleste cruised into a 3-0 lead after 31 minutes with goals from Érik Lamela, Ezequiel Lavezzi and Víctor Cuesta and from then on, it was more of a training exercise with Gerardo Martino’s side enjoying 82% of possession.

Despite Lionel Messi starting on the bench and a host of other changes to the starting eleven, Argentina had an already defensively minded Bolivian side immediately on the back foot and took the lead with thirteen minutes on the clock.

Ezequiel Lavezzi, who looked bright on his return from injury, drove forward and was scythed down by Edward Zenteno 25-yards from goal. Lamela’s resulting free kick didn’t have the accuracy of Messi’s against Panama but left goalkeeper Carlos Lampe equally helpless as a heavy deflection sent the ball flying into the opposite corner.

Almost immediately the lead was doubled when Ezequiel Lavezzi was on hand to volley in a rebound after Gonzalo Higuaín saw his initial header saved and Argentina didn’t need to wait too long for a third.

A corner from the left was never really dealt with by the Bolivian defence and Lavezzi was able to drill a low shot across goal where debutant Víctor Cuesta was well placed to stick out a boot and mark the occasion with a goal.

Messi and Lucas Biglia, another returning from injury, were introduced at half time but the match was over as a contest leaving Messi to provide the highlights with a couple of moments of outrageous skill.

Gerardo Martino couldn’t have asked for a simpler final group game and with no new injuries his side are in good shape as they look forward to a quarter final clash with Venezuela in Foxborough on Saturday. 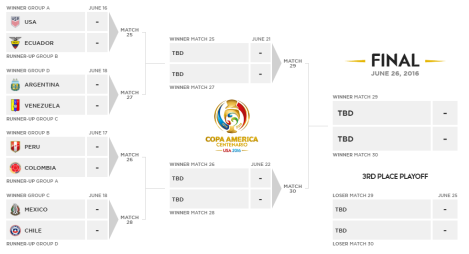