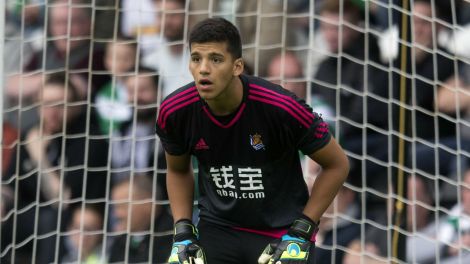 Joe Hart’s position as Manchester City number one maybe safe for the coming season but if reports that Pep Guardiola’s side have completed a deal for Gerónimo Rulli are correct, the England goalkeeper’s long term future could be in doubt.

Argentine sports channel TyC are reporting that the Premier League side have reached an agreement with Real Sociedad for the 23-year-old and although the Argentina Olympic goalkeeper will remain in Spain for the coming season, the switch will be made permanent for the 2017/18 campaign.

Negotiations have been ongoing for months as Guardiola is said to be an admirer of the goalkeeper, who many believe is already Argentina’s number one.

The details of the deal are not yet clear but it is thought that a fee of around £7.5 million has been agreed, which if true would represent an unbelievable piece of business for City. The loan back to Real Sociedad and the fees involved in that make any transfer more complicated but the bottom line appears to be that the Citizens have signed an outstanding young goalkeeper, who has the potential to be one of the best in the world.

Rulli is currently with the Argentina squad preparing for the Olympics where he will be getting his opportunity to stake a claim in the senior side having previously been overlooked by Gerardo Martino.

Ever since breaking into the Estudiantes side as a teenager, Rulli has looked destined for great things and certainly his former club will be celebrating this recent deal, given they are set to receive around $1.5 million.

Rulli’s potential is clear but what is vital is that his career is not wasted on a bench. Argentina have never been let down by current number one Sergio Romero but his experience in Europe has been largely disappointing as he has struggled for playing time.

Whether in Manchester or elsewhere, Rulli needs regular game time if he is to become the goalkeeper that many in Argentina think he could become.