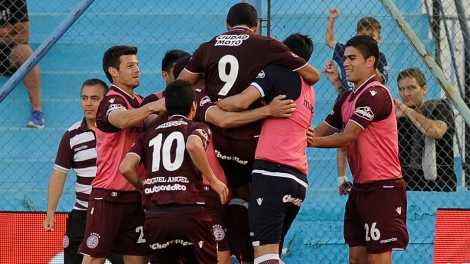 Torneo Transición champions Lanús have struggled to rediscover the scintillating form that saw them deservedly lift the title only some months ago but after a slow start to the 2016 season and few goals, El Granate appear to be hitting their stride. On Friday evening, Jorge Almirón’s side came from behind to sweep aside Temperley and momentarily climb to fifth in the table.

Temperley are looking increasingly resigned to their relegation but led after quarter of an hour when Gonzalo Ríos raced clear and was tripped by Fernando Monetti allowing Ariel Cólzera to slot in from the penalty spot. However, the lead lasted a matter of minutes after the home defence left Maxi Velázquez completely unmarked from a corner and the defender’s powerful header found the net.

With the wind in their sail, Lanús pushed forward and it wasn’t long before the outstanding Lautaro Acosta put the visitors in front. The pace and movement was too much for El Gasolero and Miguel Almirón slipped in Acosta to calmly clip the ball over Matías Ibáñez. José Sand added a third before the break after a handball presented the striker with a penalty and Lanús were able to comfortably hold onto their lead.

Later in Córdoba, goalkeeper Pablo Santillo returned to haunt his former employers as the Arsenal goalkeeper produced an outstanding performance to deny Talleres and end their five-match winning streak.

La T were utterly dominant but wasteful finishing and an inspired goalkeeping performance meant the home side were unable to find a breakthrough. Gonzalo Klusener had the best chance of the game when Leandro Marín was adjudged to have handled in the box but the centre-forward’s penalty was saved by Santillo and scrambled clear.

In the circumstances, a point is a good result for new Arsenal coach Lucas Bernardi but it was another limp performance and the very real threat of relegation still looms.