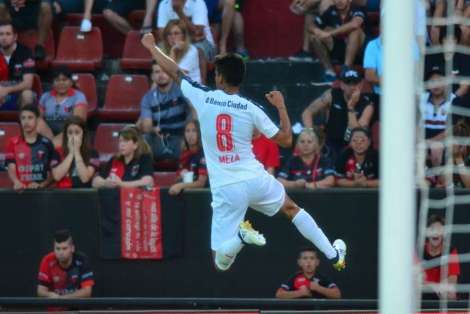 Gabi Milito’s status at Independiente has perhaps afforded him more patience than previous managers but after a disappointing start to the season, there is significant pressure on the former Barcelona defender to finish on a high and secure his job for the new year. El Rojo didn’t produce a scintillating performance against Colón on Sunday evening but crucially secured back-to-back wins and scored more than once for the first time in three months.

Maxi Meza returned to the starting eleven after an injury layoff and gave the visitors a deserved lead before the half hour mark with a powerful right footed volley from the edge of the box. Colón weren’t able to do enough to find a way past Martín Campaña and in the first minute of ten minutes of stoppage time, following a head injury to Tomás Sandoval, substitute Germán Denis wrapped up the points. In-form Banfield visit Avellaneda next week and Milito will want to close the year with another three points on home soil.

A little later in Rosario and Lanús chalked up a fifth straight league win but were made to work harder than expected by a second-string Central side. Eduardo Coudet kept all his first team names in reserve ahead of Thursday’s Copa Argentina final but led early in the second half when Maxi Lovera fired past Fernando Monetti from 30 yards out. Not wanting to see their momentum wane, El Granate struck back and after Lautaro Acosta bent in a wonderful equaliser, Alejandro Silva thumped in a second seconds later. The Transición champions held on for all the points and are now up into fourth, only three points off the top.

Finally in the Estadio Monumental José Fierro, Atlético Tucumán followed up their impressive win away to Godoy Cruz with a thumping 3-0 win over Quilmes. The dangerous Fernando Zampedri headed El Decano ahead just before half time and when David Baroba’s deflected strike whistled past Cesar Rigamonti five minutes after the restart, the visitors were in trouble. Unable to find a way back into the game, Luis Rodríguez ensured the result with a scrappy 85th minute goal. Quilmes are the only side in the bottom ten of the descenso not to have changed managers but Alfredo Grelak will be worried to see his side hovering above the drop zone after three consecutive defeats and nine goals conceded.