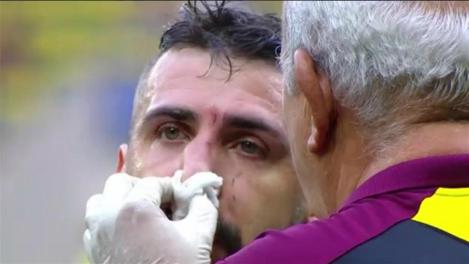 Edgardo Bauza has for months stated that Gonzalo Higuaín and Lucas Pratto are his first choice number nines for Argentina and despite calls for his inclusion Mauro Icardi was next in line. Should anything happen to either of the first two, the controversial Inter Milan striker would get his chance and in the same weekend that Icardi has hit a nine-minute hat-trick in Serie A, Pratto has suffered a broken nose for São Paulo and is now a doubt for La Albiceleste.

Pratto has been excellent since Bauza promoted him to the Argentina squad and in outstanding form since his summer move to São Paulo but in Saturday’s 3-0 defeat to Palmeiras, the 28-year-old fractured his nose in an aerial challenge.

The São Paulo centre-forward completed the 90 minutes but has required an operation to reset the bone and is now understood to be a doubt for Argentina’s World Cup qualifiers against Chile and Bolivia at the end of the month.

Higuaín is expected to start against Chile in the Monumental but Pratto, who has scored four goals in his first five matches for his new club, would have been the back-up.

Should Pratto be forced to withdraw from the squad it remains to be seen if Bauza will stand by his word and select Mauro Icardi as the third choice number nine.

If form dictates anything then the Inter captain will get his chance but with River Plate striker Lucas Alario back in training, it will be interesting to see who would get the nod.