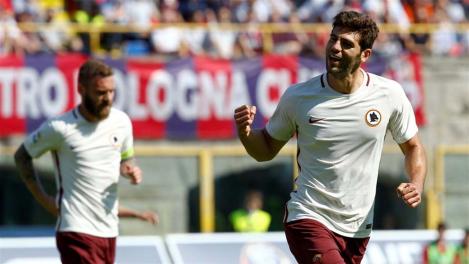 Roma’s hopes of lifting the Serie A title appear slim but that didn’t prevent the Giallorossi easing to victory against Bologna and ensuring that Juventus’ lead at the top remains at six points.

Federico Fazio has had an outstanding season playing himself back into Argentina contention and the centre back opened the scoring on Sunday with a close range volley before goals from Mohamed Salah and Edin Dzeko wrapped up the win.

Elsewhere in Serie A, Udinese piled more pressure on free-falling Genoa with Rodrigo de Paul instrumental in the 3-0 win.

The former Racing midfielder blasted the home side ahead after 20 minutes with a fierce effort from outside the penalty area and after Duvan Zapata had doubled the lead, it was de Paul’s corner that was fumbled into the net to make it three.

Finally, in Sampdoria’s 2-2 draw with Fiorentina, both Gonzalo Rodríguez and Ricky Álvarez were both on the scoresheet.

And after Álvarez fired Sampdoria back in front it took a last minute Khouma Babacar equaliser to ensure a share of the points.