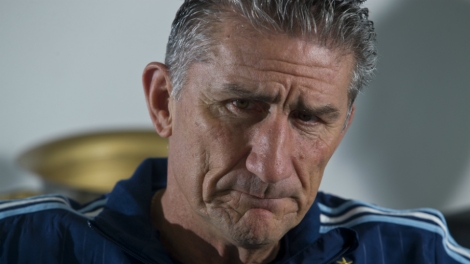 After days of speculation, AFA president Claudio Tapia has confirmed that an agreement has been reached to terminate the contract of Argentina manager Edgardo Bauza.

With Argentina’s World Cup qualification hopes in the balance and Bauza only earning three wins from his eight matches in charge, pressure was mounting on the 59-year-old and on Monday evening, Tapia met with Bauza’s agent Gustavo Lescovich to negotiate the terms of El Patón’s departure.

The AFA reportedly need to pay Bauza $900,000 in addition to some months of unpaid wages but despite outstanding debts to Gerardo Martino yet to be paid and money needed for an eventual replacement, a deal has been agreed.

Tapia told reporters, “We have reached a verbal agreement,” and it is now understood that the termination of the contract will be signed in the coming hours.

Lescovich confirmed this: “We have reached an agreement with Chiqui Tapia and tomorrow there will be one last press conference.

“Everything ended well. Chiqui Tapia has every right in the world to choose a coach.”

With the press conference expected tomorrow to finalise this, Tapia and Marcelo Tinelli will travel to Europe on Thursday to look for Bauza’s successor.

Reports on Monday evening suggest that the pair will meet with Atlético Madrid manager Diego Simeone over the vacancy while others suggest a deal for Jorge Sampaoli is as good as confirmed already.

Nothing has been confirmed but the AFA seem set to speak to both in addition to captain Lionel Messi and Javier Mascherano.

One possible domestic candidate who seemed to rule himself out of the running on Monday was River Plate coach Marcelo Gallardo.

“I can’t leave River until the end of the year. I gave my word,” the 41-year-old told Fox Sports Radio, having agreed to remain at the Monumental in December.