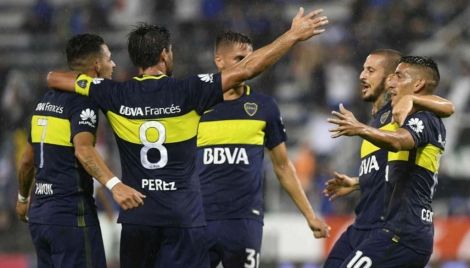 If the defeat to Talleres was supposed to be a signal the wheels may come off at Boca Juniors, Guillermo Barros Schelotto’s side have responded well and on Sunday night a 3-1 victory over Vélez Sarsfield was a third consecutive win since that loss.

Despite missing Fernando Gago and Sebastián Pérez through injury, Boca were on the front foot from kickoff and had already gone close to an opener when Cristian Pavón rattled the crossbar.

However, the visitors didn’t need to wait long and another swift break led by Ricardo Centurión saw Pavón square the ball for Darío Benedetto to slam past Fabián Assmann.

If Vélez’s task was already tough, Héctor Canteros made it far more difficult when he was shown a straight red for a rash, studs up challenge on Juan Insaurralde.

With the man advantage, Boca doubled their lead and it was former Vélez defender Gino Peruzzi with the goal, arriving in the penalty area to head firmly into the bottom corner.

Vélez pulled a goal back through young centre forward Maxi Romero but hopes of a comeback were almost immediately dashed thanks to Pavón sliding in to convert Frank Fabra’s cross past the dispairing Assmann.

Without a win in four, Vélez are still looking over their shoulder in the descenso table while Boca ensure that no one is closing their lead at the top.