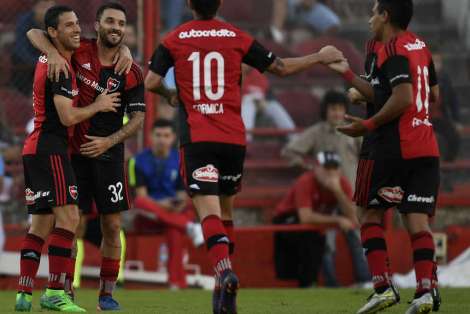 Newell’s Old Boys’ title challenge still shows no signs of waning and on Saturday afternoon Diego Osella’s side picked up another three points with victory over Huracán.

It wasn’t a particular impressive performance from La Lepra but crucially it was fifth consecutive clean sheet which meant Ignacio Scocco’s deflected shot midway through the second half was enough to claim the win.

Huracán remain winless in six and remain in relegation danger while Newell’s have joined Boca Juniors at the top for at least 24 hours before Guillermo Barros Schelotto’s side host Arsenal.

In La Plata, San Lorenzo followed up their dramatic Copa Libertadores win in midweek with a well-earned victory over Gimnasia.

Diego Osella’s side arrived off the back of two straight league defeats but were good value for all three points against an awkward Gimnasia side.

Veteran Juan Mercier scored the only goal of the game, striding forward to play a neat one-two with Gonzalo Bergessio before slotting past Alexis Arias.