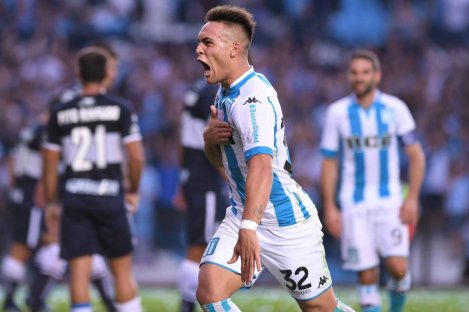 After giving the Argentina under-20s an injury scare last week, Lautaro Martínez returned to the Racing starting eleven on Saturday and the 19-year-old’s sweetly struck volley was a parting gift before heading off with La Albiceleste for the World Cup.

Following last weekend’s defeat to Temperley, La Academia had to return to winning ways if they were to maintain ambitions of catching Boca Juniors at the top and while Gimnasia ensured Diego Cocca’s side had to work for the points, there was only one deserved winner.

Martínez’s first time volley ten minutes before half time was enough for the win and inflicted a third straight defeat on Gimnasia. Racing trail Boca by six points with seven rounds to play but next weekend’s clásicos will likely shape the title race.

Unbeaten now in five, Atlético de Rafaela secured back-to-back wins for the first time since September with a 3-0 win over Unión and are dreaming of a miraculous escape from relegation.

After a goalless first half, Leandro Diáz poked La Crema ahead and although it remained an evenly contested match, the home side doubled their lead on the counter when Ramiro Costa smashed the ball past Nereo Fernández.

Gabriel Gudiño wrapped up the points with a close range header, his eighth goal of the season, and with eight matches remaining and vital games against Quilmes and Sarmiento in that time, belief is growing for Atleti.

In Paraná, Lanús earned a 2-0 win over Patronato thanks to José Sand’s second half brace. The 36-year-old was gifted the first from the penalty spot after a mindless challenge on Lautaro Acosta by Abel Masuero and late on added a second when he diverted the ball into the net with his chest from close range.