After all the coaching announcements and various meetings with players over the past week or so, Jorge Sampaoli’s Argentina is taking shape and on Tuesday afternoon the 57-year-old held court in Ezeiza to further outline his vision ahead of next month’s crunch World Cup qualifiers.

Sampaoli had made it clear while still at Sevilla that the Argentina job was his dream and since succeeding Edgardo Bauza, the diminutive coach has barely been away from the national training centre stating that “there is no place in the world that is comparable to this place of work.”

Under previous coaches that may not necessarily be a positive thing but Sampaoli seems to have been granted a great deal of control by the Argentine Football Association (AFA) and wasted no time in shaking things up and introducing himself.

His work has only just begun and in the coming days Sampaoli will head to Europe, where he will be meeting with most of the players he took to Australia and Singapore for his first matches in charge back in June before naming his squad for the qualifiers against Uruguay and Venezuela.

Currently in the fifth-place playoff spot in CONMEBOL qualfication, Argentina face a Uruguay side in third but only a point ahead on August 31st and Sampaoli affirmed: “We are going to Uruguay with the obligation to win. 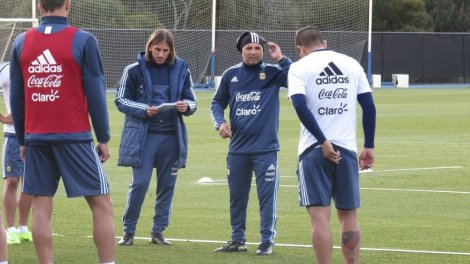 “We are watching all of Uruguay’s last matches. They are a very brave and determined side with a structure that has been sustained over time so we are evaluating what to do so that Argentina will impose itself in what is a difficult situation.

“Uruguay will play a lot of balls in the air towards [Edinson] Cavani and [Luis] Suárez and will try and initiate attacks with few passes,” Sampaoli asserted before admitting that it’s a style of football far removed from his own: “You will see a match of two distinct methodologies.”

So, with only those two friendlies against Brazil and Singapore to go on, who will Sampaoli select to carry out this task in Montevideo and five days later against Venezuela?

There is only one guarantee: “I was fortunate enough to take over the national team with Leo’s [Messi] suspension lifted. The only starter is Messi, the rest of the squad will be evaluated,” Sampaoli confirmed.

“Against Uruguay, Leo is going to play where he plays best; in the centre, or coming in from the right. We have good communication with Messi, sending messages constantly and we talk about his position on the pitch.

“You have to give him the tools. Isolating Leo is a mistake for me, you have to surround him with very good players.”

Finding the balance to do this has been the conundrum for every Argentina manager since Messi rose to prominence but there have been several other regulars in the squad over the years and that gave rise to the so called ‘friends club.’

Sampaoli’s immediate decision to call-up Mauro Icardi went some way to dispel that rumour and the manager confirmed that other than Messi, no other player is certain.

“There are no players with privileges but we have the best player in the world and from there the team is born.”

Javier Mascherano certainly falls into that category and has been a symbol of the national team for the best part of decade but while Sampaoli understands El Jefecito’s importance, the Barcelona star may now be fighting for a place in the Argentina defence: “Mascherano is important; for his experience and quality and what he represents within the group.”

One player who wasn’t selected for the previous friendlies was Sergio Agüero but Sampaoli hasn’t closed the door on the Manchester City striker: “We had a conversation with Agüero and he has the same chances as the other fowards. The number nines available are very talented but the most important thing is how they can compliment the other players.”

Two players who will miss the clash with Uruguay will be Ramiro Funes Mori, who is ruled out through injury for possibly another nine months: “Ramiro’s absence is a real blow as he has the characteristics that are very close to our idea of football but we look forward to his recovery so he can be called again.”

And the suspended Éver Banega, who behind Messi appears to be a favourite of Sampaoli and the player who Argentina intend to build the midfield around: “It affects us a lot that Banega is not available so we will look for a player with his characteristics. With the atmosphere that will be on the pitch against Uruguay, we need a player who is able to think.”

Finally, speaking on the subject of Argentina’s youth system and the new coaches that have been appointed at every level with the view of having some continuity flowing through, Sampaoli said: “The under-20s excite me because this is the team that is goig to qualify us for the Olympics. I’m excited about the work within the youth system, and being part of this makes me very happy. The boys are the ones who are going to generate the great transformation of Argentine football.”

And the big story within the nation’s domestic football is Ricardo Centurión’s collapsed transfer to Boca Juniors and Sampaoli was asked about his view on the highly talented but controversial forward: “I only analyse Centurión in terms of football,” the Argentina manager opined, which is perhaps not surprising given his support of Arturo Vidal when in charge of Chile.

“I can’t comment on a context that I don’t know about, I have no other opinion of what he does off the pitch. I don’t want to say more because we don’t know enough to judge someone’s behaviour but if he is called it will be on his performances for his club and his form. I will always analyze it in this sense.”