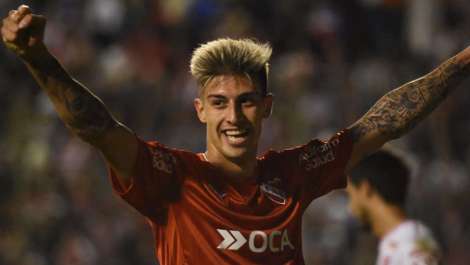 After weeks of back and forth and the suggestion that the deal was virtually dead in the water, Zenit St Petersburg have finally reached an agreement with Independiente for the transfer of forward Emiliano Rigoni.

It is understood that the Russian club’s final offer of around €12 million has now been accepted and Rigoni will travel to St Petersburg tomorrow to finalise the deal.

El Rojo’s valuation of a player, who scored eleven league goals last season and has been outstanding since the arrival of Ariel Holan, the structure of Zenit’s payment and the negotiations with former club Belgrano have all proved stumbling blocks.

However, Rigoni and his agent were keen to make the switch to Europe and Independiente president Hugo Moyano informed Holan on Sunday that he would be accepting the latest offer, ruling the 24-year-old out of Tuesday’s Copa Sudamericana clash with Atlético Tucumán.

For a club racked with debt, it is an amount that Independiente can hardly turn down but losing a player so central to Ariel Holan’s system just days before a Copa Sudamericana last 16 tie and a week before the start of the new league season is less than ideal.

Lightening quick, two-footed and with an eye for goal, Rigoni is able to operate across the attack on either flank or up front and having steadily improved over the past few seasons, the 24-year-old is now ready to test himself in Europe.

Having said his goodbyes after last month’s victory over Deportes Iquique, Rigoni said, “If I return to a club in Argentina, it will be Independiente or Belgrano [his former club]. There will be no other.”

Depending on the success of his switch to Zenit, time will tell if either club will see Rigoni tearing down the wing again.