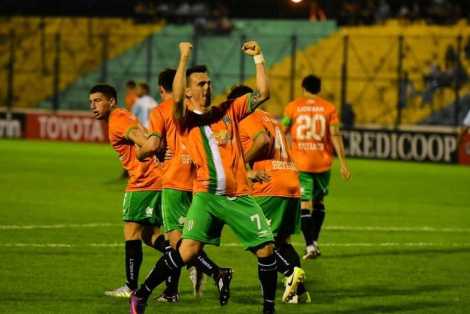 Four first half goals eased Banfield into the Copa Argentina last 16 with victory over Atlético de Rafaela in Formosa and Huracán joined them thanks to Wanchope Ábila’s goal against Colón.

Pablo Mouche’s diving header after two minutes put Banfield on the right path and when Nicolás Bertolo twisted his way through the heart of the Atlético defence, the lead was doubled.

Mouche made it three with a looping header from the edge of the box after Jorge Carranza’s weak punch left the goalkeeper in no man’s land and Gonzalo Bettini’s close range effort concluded a dominant first half display.

Atlético pulled two goals back late on through Jorge Velázquez and Gonzalo Klusener but El Taladro had done enough and set up a last 16 clash with either Newell’s Old Boys or Godoy Cruz.

Huracán are also in the next round after Ramón Wanchope Ábila’s late penalty was enough to see off Colón in Sarandí.

Still goalless with fifteen minutes remaining defender Guillermo Ortíz’s hand halted Ignacio Pussetto’s charge into the penalty area and Ábila made no mistake from the spot. Two goals in two since his return, Wanchope’s importance to El Globo is clear.

The number nine helped Huracán to the Copa Argentina in 2014 and his goal keeps the dream of a repeat alive. Aldosivi or Vélez Sarsfield are up next for the club in the last 16.