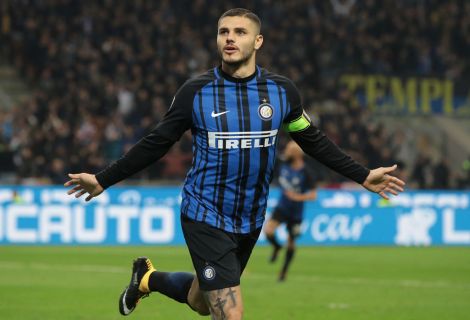 There is no stopping Mauro Icardi at the moment and fresh from his derby hat-trick heroics at the weekend, the Inter captain was again among the goals to help his side go momentarily top of Serie A on Tuesday.

Inter welcomed Sampdoria to the San Siro and led after 18 minutes when Milan Skriniar scrambled the opener from a corner.

A superbly struck volley at the back post from Icardi doubled the lead and shortly after half time, the 24-year-old was on hand to tap in Ivan Perisic’s low cross.

Mauro Icardi for Inter Milan in Serie A:

Dawid Kownacki and Fabio Quagliarella scored to set up a nervy finish but Inter held on for all three points and now wait to see if Napoli can regain top spot on Wednesday.

With a spot in Jorge Sampaoli’s Argentina plans already, Icardi took his season tally to eleven from ten games and only trails Lazio’s Ciro Immobile.

In the German Cup, Lucas Alario was once again on target for Bayer Leverkusen as his new side ran out 4-1 winners over Union Berlin.

Julian Brandt had given Leverkusen a first half lead but there was a potential shock on the cards when the second division side equalised immediately after the break. However, it didn’t last long as a weak clearance looped in the air and Alario sent a looping header back over the goalkeeper and into the net.

Wendell scored from the penalty spot late on and Charles Aranguiz added a fourth for good measure.

Elsewhere, Schalke earned a 3-1 against third-tier Wehen Wiesbaden and Franco Di Santo finally got his name back on the scoresheet.

The Argentinian striker hadn’t scored in 598 days but headed in midway through the first half to send Schalke on their way. Guido Burgstaller and a Alf Mintzel own goal eased the Bundesliga club through and despite a late consolation goal, Schalke were safely in the next round.

In English football’s League Cup, Manchester City were made to sweat by Championship side Wolves before eventually prevailing on penalties.

Pep Guardiola rotated his side but still started with Sergio Agüero and Gabriel Jesus in attack. However, Wolves became the first team to prevent City scoring this season and forced the tie to extra time.

City were still unable to score and so Agüero was unable to surpass Eric Brook’s scoring record but the Argentinian was on hand to chip in the decisive penalty after Claudio Bravo saved twice.

And finally in the Copa del Rey, Sevilla put their three-game losing streak behind them with victory over third tier Cartagena.

Pablo Sarabia had already clipped Sevilla ahead when Argentinian Joaquin Correa slipped in a second. Luis Muriel added a third to ensure victory but Eduardo Berizzo must now look to move forward and improve the club’s fortune in La Liga.