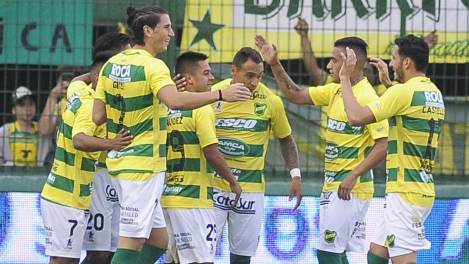 Since Jorge Sampaoli opted to pluck Sebastián Beccacece away to form part of his Argentina coaching staff, Defensa y Justicia had been experiencing something of a lull and quickly discovered that Nelson Vivas was not the answer. However, under Juan Pablo Vojvoda, El Halcón have rediscovered form and Friday’s win over Godoy Cruz equalled the club’s best run of form in the top flight.

A key part of that four-match winning streak has been the emergence of 21-year-old Nicolás Fernández, whose six goals have not only contributed to those victories but given Defensa y Justicia a cutting edge that had previously been lacking.

Godoy Cruz were a threat throughout in Florencio Varela but two instinctive finishes early in each half from Fernández put the home side firmly in control.

Two goals in two minutes by Angel González and Javier Correa drew El Tomba level but all that hard work was undone nine minutes from time. Ignacio Rivero drilled the ball across the Godoy Cruz goal and Luciano Abecasis inadvertently deflected into his own net.

The visitors are always weaker on their travels but will curse their luck when looking back on this latest defeat while Defensa y Justicia climb up into eighth.

In Parque Patricios, Huracán and Patronato had to settle for a share of the points, a result that does little to help either in the relegation battle.

El Globo could have gone third with a win but found themselves behind on the stroke of half time thanks to Adrián Balboa’s wonderful scissor kick.

Frustrated by the visitors, Huracán needed a break and got it minutes after the restart when Walter Andrade conceded a penalty and was sent off for a slight tussle off the ball. Sebastián Bértoli preserved the lead, saving Mauro Bogado’s spot kick but down to ten men, the visitors’ task became more complicated.

Huracán continued to lay siege on the Patronato goal but it took a second penalty to force an equaliser. This time Fernando Coniglio stepped up and his low effort sneaked past Bértoli to ensure it ended all square.

Earlier in Santa Fe, Unión lost ground on San Lorenzo and Boca Juniors at the top after being held to a 1-1 draw by Belgrano.

Franco Fragapane slid in a first half opener for El Tatengue but unable to find a second, Erik Godoy eventually volleyed an equaliser for the visitors. It could have been worse for Unión but in the closing stages, Matiás Suárez struck the post.