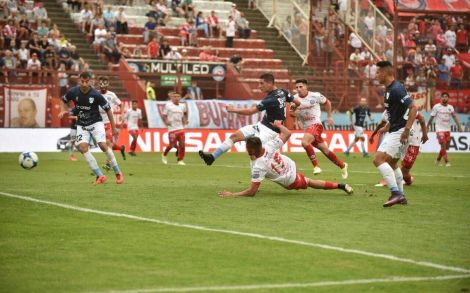 What may or not prove to be an important round of fixtures in the relegation battle saw Temperley at least avoid what would have been a disastrous defeat away to Argentinos Juniors and Olimpo breathe some life into their survival hopes by inflicting a devastating defeat on Chacarita Juniors.

Three straight defeats have sucked Argentinos Juniors into the mix themselves but Temperley were in dire need of a result in La Paternal on Saturday afternoon. Despite being second best for large parts, the visitors led after 20 minutes when Juan Sánchez Sotelo opportunistically lobbed Lucas Chávez from close to the half way line.

Los Bichos were unable to find a way past Josué Ayala until the 66th minute when Leonardo Pisculichi on his 150th appearance for Argentinos, curled in a wonderfully struck free kick.

Temperley’s afternoon soon got worse when Gonzalo Escobar was sent off and the home side almost immediately took full advantage with Nicolás González tapping in a second.

However, Rodrigo De Ciancio salvaged a point five minutes from time and when Argentinos Juniors had Jonathan Sandoval red carded, the two sides settled for a share of the points.

Like Temperley, Olimpo remain in the drop zone but did secure an invaluable win over relegation rivals Chacarita Juniors. David Depetris’ deflected volley opened the scoring shortly before half time and Maxi Fornari doubled the lead on the counter straight after the restart.

The Aurinegro remain a long way from safety while Chacarita are already beginning to look destined for a swift return to the Nacional B.

Finally in Rosario, Racing Club began life after Diego Cocca but didn’t experience an immediate change in fortune. Only the goalscoring instincts of Lautaro Martínez and Lisandro López denied Newell’s Old Boys what would have been a deserved three points.

Luís Leal’s thumping header gave Newell’s an early lead but Martínez, earlier rumoured to be close to sealing a move to Atlético Madrid, nodded in an equaliser.

La Lepra retook the lead from the penalty spot through Brian Sarmiento and perhaps should have been further ahead before Lisandro López rose to head Racing level for the second time.

La Academia could have nicked it after Newell’s had Nahuen Paz sent off late on but couldn’t find a winner. Juan Manuel Llop’s inconsistent results continue ahead of next week’s clásico rosarino while Racing look for their new manager.