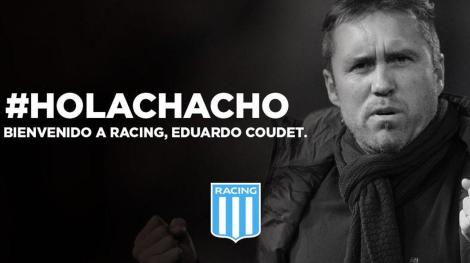 After a deeply disappointing second half of 2017, Racing Club are aiming to for a much improved next year and have moved swiftly to ensure a positive start with the double appointment of Eduardo Coudet as manager and recently retired, iconic striker Diego Milito as director of football.

Diego Cocca’s second spell in charge of the club failed to produce the same results as his championship winning side first time round and after elimination from the Copa Sudamericana and a clásico defeat, the 45-year-old coach walked away, swiftly taking over at Liga MX club Tijuana.

Racing were patient in their pursuit of Cocca’s replacement but as fate would have it, his eventual successor arrived from Tijuana.

Eduardo Coudet had been linked with the post previously but took a little time out after his successful first managerial job with Rosario Central and that led to an underwhelming few months in charge of Xolos.

The 43-year-old impressed in his 18-month spell with Central, leading El Canalla to a third-placed finish in the Primera and the final of the Copa Argentina. Aiding the development of youngsters Franco Cervi and Giovani Lo Celso, the attractive, attacking football that Coudet implemented helped establish his reputation as another of Argentina’s fine young coaches and would be a major factor behind Racing’s decision.

While Coudet’s short spell in México will ultimately be viewed as failure, Xolos have been through a great number of coaches and it’s little surprise that the former River Plate midfielder is swiftly back in work.

Two names immediately linked with moves to Avellaneda are Alejandro Donatti and Damián Musto, who both played under Coudet in Rosario before switching to Tijuana.

If the appointment of Coudet and the news that striker Lautaro Martínez would remain at the club for at least another six months was good news, Diego Milito’s return will have supporters overjoyed.

The former Argentina international only hung up his boots earlier this year but has taken a role upstairs at the club where he started and ended his playing career.

Milito won two Primera titles during his two spells with Racing but will now take up the position of technical secretary, or what many in Europe would consider a director of football role. The 38-year-old will sign a three-year contract and travel with president Víctor Blanco to Paraguay for the Copa Libertadores draw this week.

There are few that know the club better and with a wealth of experience in Europe, Milito is perfectly placed to advise both Blanco and Coudet on the running of the club. There is certainly no one that could garner as much respect from supporters in Avellaneda.