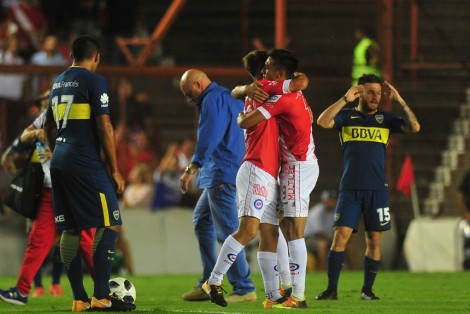 With Talleres and San Lorenzo dropping points over the weekend, victory for Boca Juniors could have all but ended the title race but with Guillermo Barros Schelotto rotating his squad and missing players through injury, Argentinos Juniors served up another Superliga upset and kept things at least interesting at the top.

The impressive Alexis Mac Allister, son of Boca icon Carlos, volleyed the home side in front after only ten minutes and with little response from league leaders, it was Los Bichos who continued to look the more likely side to find the net.

Javier Cabrera had missed a great opportunity in the first half but the forward’s pace in tandem with Mac Allister, Damián Batallini and Nicolás González caused the Boca defence problems all evening and so it was little surprise when the lead was doubled.

An outstanding passing move saw Mac Allister exchange passes with González, completely slicing apart Boca’s back four, before squaring the ball for Batallini to tap in.

Even as Boca pushed forward, chances were scarce and so the unbeaten run since the end of November came to an end. Argentinos Juniors had already shown more than enough this season to show they belong back in the top flight and while Boca remain firm favourites to lift the title, the lead remains at eight points.

Earlier in San Juan, Independiente made light work of San Martín with a commanding 4-0 win to take El Rojo back up into the 2019 Copa Libertadores spots.

After suffering a shock defeat in their current Copa Libertadores campaign opener, Ariel Holan needed a reaction from his players and he got that as an even opening quarter of an hour was broken by Martín Benítez. Jonás Gutiérrez battled down the left and when the ball was eventually clipped into the San Martín penalty area, Maxi Meza escaped a static offside trap to nod the ball back into the path of Benítez for a simple finish.

The goal proved to be the turning point and while the rest of the first half passed with little incident, El Rojo ran riot after the break.

Reported Bayern Munich target and possible option for Argentina, Fabricio Bustos doubled the lead after 52 minutes and when another swift counter ended with Leandro Fernández tapping in a third a couple of minutes later, the game was over.

Independiente’s pacy, dynamic attack were cutting through San Martín almost at will and only some typically poor finishing or decision making prevented the lead being extended further.

A welcome return to form and goals for El Rojo, who have plenty to play for in the coming months. Still with a game in hand, Independiente would still be eight points off leaders Boca with victory and so while league success might be a long shot, recovering in the Libertadores is essential.

Meanwhile in La Plata, Estudiantes managed to see off the challenge of Olimpo thanks to Juan Otero’s goal 20 seconds into the second half.

Olimpo, who celebrated victory over relegation rivals Arsenal last week, are still dreaming of a great escape but that looks increasingly unlikely after another battling display ended in defeat.