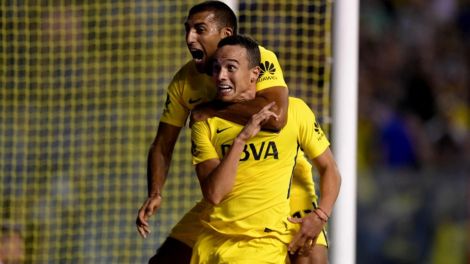 Round Nineteen might just be the weekend that Boca Juniors made sure of their title defence as while there are still eight matches remaining, Leonardo Jara’s last-second goal earned the league leaders three points when it looked as though Tigre would be leaving with a point.

Less than a week after losing to Argentinos Juniors, failure to beat Tigre at La Bombonera would have been a wobble but when Matías Pérez Acuña volleyed an equaliser to cancel out Edwin Cardona’s 75th minute penalty, it looked like that would be the reality. Jara sliding in the winner with the last kick of the game maintains an eight-point lead and Boca remain overwhelming title favourites.

That lead is over Talleres, who came from behind to seal a 3-1 win over Atlético Tucumán in Córdoba and possibly Independiente after El Rojo defeated Argentinos Juniors to move into third and could go level with Talleres if they win their game in-hand. 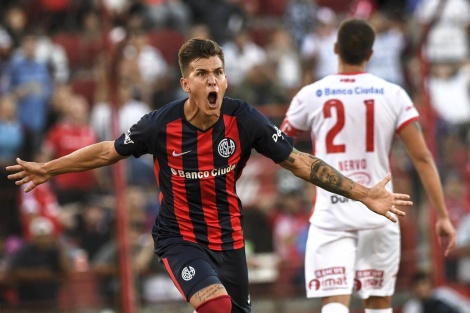 That extra match will come against San Lorenzo, who lost ground after drawing with Huracán in the clásico. It could have been worse for Los Cuervos but Nicolás Reniero’s late equaliser salvaged a point leaving San Lorenzo 13-points adrift.

Godoy Cruz climbed into the Copa Libertadores spots with a 1-0 win over Arsenal at the expense of Racing Club, whose five-match winning streak was brought to an end with a 1-1 draw away to Chacarita Juniors.

River Plate ended their own run of form thanks to a last-gasp own goal that gifted Marcelo Gallardo’s under-fire team a 1-0 win against Patronato. Los Millonarios have been in dreadful form and while the performance was hardly an improvement, River were given a little boost ahead of Wednesday’s Supercopa against Boca.

And finally, Omar de Felippe made a winning start as Newell’s Old Boys manager with an impressive victory over San Martín. While the club’s problems run far deeper than something to be fixed with a new coach, La Lepra produced their best performance in a long time to run out deserved 2-0 winners.

So, in case you missed any of the action, here are all the games, all the goals and how the table looks after round nineteen… 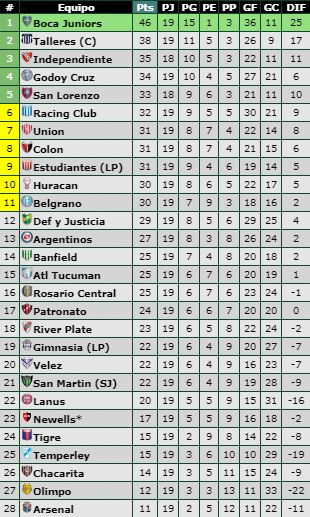 One response to “All the goals from Round Nineteen: Dramatic winner keeps Boca out in front, San Lorenzo drop points in clásico leaving Talleres & Independiente in pursuit (VIDEO)”