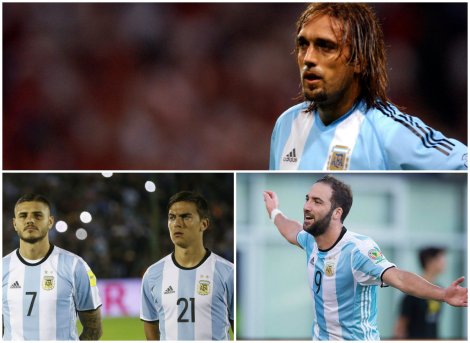 The debate over who should lead Argentina’s attack will likely rage until after the World Cup unless La Albiceleste lift the trophy in Russia but iconic number nine Gabriel Batistuta has thrown weight behind the argument for Gonzalo Higuaín.

With 56 goals, only Lionel Messi has scored more goals than Gabriel Batistuta for Argentina, so the 49-year-old knows all there is to know about pulling on the number nine shirt and scoring at a World Cup.

Ten goals across three tournaments, Batistuta is Argentina’s all-time leading scorer in the competition and the only player to score two hat-tricks in different World Cups. His reputation remains as one of football’s deadliest strikers but the man Jorge Sampaoli has entrusted in Argentina’s recent friendlies, Gonzalo Higuaín still divides opinion after a series of high-profile misses.

The emergence of Mauro Icardi and Paulo Dybala has only added to that and so when both youngsters were left out of the recent squad, many felt Sampaoli was making a big mistake.

“[Paulo] Dybala and Mauro Icardi are great players, but they are not above Sergio Agüero and Gonzalo Higuaín,” Batistuta said ahead of Argentina’s friendly against Spain.

“El Pipa [Higuaín] has to be the number nine for Argentina because of the quality he has and for the amount of time he’s been doing it.”

Despite this Batistuta is an admirer of Icardi and doesn’t think Argentina should leave the Inter captain behind.

“That doesn’t mean that Icardi doesn’t have that quality and he would be an excellent substitute,” Batistuta admitted.

Icardi appeared to end the World Cup qualification process as Sampaoli’s first choice number nine with Agüero not fit again but after failing to score, Argentina have looked back to Higuaín and in this recent squad, Racing Club youngster Lautaro Martínez.

Mauro Icardi is the best marksman in #SerieA , converting 35.48% of his shots into goals for #FCIM . Lorenzo Insigne converted just 6.36% of his chances for #Napoli https://t.co/Xu3CwxNMhC #Argentina pic.twitter.com/QjUWE4TGiP

“I was surprised that Sampaoli discarded him [Icardi] after only a couple of months. I would have waited a little longer and taken him.

“A player who scores that many goals in Italian football has capabilities and you can not deny that. At a World Cup you always need that.

Such an embarrassment of riches in attack, picking an Argentina side is no easy task and the temptation to force as many of the big name forwards into the starting eleven is clear.

Lionel Messi with two centre-forwards is often a suggested way around some of these problems and Batistuta thinks that it could be possible but represents a risk.

“They can do it together, but we ask that everyone goes forward to attack and then nobody gets back to defend. If we then lose 4-3 we get angry with the manager. You have to find a balance and that’s difficult,” Batistuta admits.

“Being in Jorge Sampaoli’s shoes is not so easy. Some of these big names will have to be left out and just like what is happening now, we don’t forgive anything.

Argentine football supporters are notoriously difficult to please and somewhat unforgiving but Batistuta ended with some advice.

“We Argentines have to enjoy all the talents that play for us. The Italians, the Germans and the Spanish would love to have our players.”