A ‘modern classic’: As a term it often comes off as something of a contradictory phrase. However, much like from a literary standpoint, the continually influx, kaleidoscopic nature of football can also bring to life what would initially at least seem an oxymoron.

In an in-depth interview with Argentina’s Pagina12 news portal, Eduardo Chacho Coudet was rather analogously referred to as a, ‘modern, old-school plated coach.’ Indeed within said article the new Racing Club boss himself even alluded to a longing to return to the days of yesteryear when footballing debate centred on the ball.

A renowned advocate of the ‘You play the game the way you live it’ philosophy, then it should perhaps come as no surprise to see the hallmarks of tradition emblazoned all over his newest coaching endeavour.

Without wanting to infer too much significance on formation above what is predominantly geometrical. One of the more notable ‘retro’ aspects of Coudet’s Racing tenure so far, has been the use of a perceivable (largely malleable) attacking 4-2-2-2.

Having become something of a forgotten shape, it does have strong roots within South American folklore. Indeed perhaps Chacho’s inspiration may in part have stemmed from his playing days, and facing off against Manuel Pellegrini’s record breaking all-conquering San Lorenzo side.

The core idea for his own Racing side’s modern day take on the classic, has ostensibly been its intended influence on both sides of the game:

From a defensive perspective, having two strikers’ with the strength and ability to hold the ball and bring others in to play, such as the prodigiously gifted Lautaro Martínez, alongside the veteran leadership of Lisandro López, supported by two narrower attacking midfielders, nominally: Matías Zaracho and Ricardo Centurión in behind them, has more often than not obligated opponents to protect the half-spaces both between their fullbacks and the accompanying centre-back, as well as at the back of their midfield pivot(s).

This is because the forwards, especially if situated in the half spaces, pose a threat to the defence to to go in behind. Much in the same way the two narrow(er) midfielders occupy the opposition central midfield players.

Notwithstanding of course that this then similarly restricts the defending teams ability to get both their wider defenders forward to support the attack, for fear of leaving the defence shorthanded. 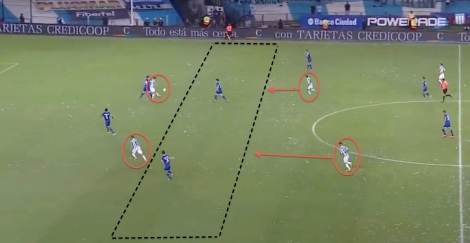 Both Racing forwards pairing up & occupying the Vélez Sarsfield central defenders plus drawing the full-backs attention.

This is in turn allows the two interior midfielders to see the game facing forward, & creates said space in the advanced action ‘Zone of Influence’ (Perforated square in-front of the opposition defence & behind their midfield line) for Racing to attack.

Interchange and rotation to surprise and confuse

From an attacking perspective in possession, Racing have been impressively effective exponents of showcasing their own attacking variability over and above simply a rigid system.

The forward duo have so far this campaign demonstrated both their aforementioned adeptness of ‘fixing’ their opponents defensive players. This in turn has often translated either into a series of dangerous diagonal runs inside the full-back or alternatively forcing them to be drawn out wide. Therefore creating pathways on the inside channels from which again the likes of Centurión and Zaracho particularly, have been able to drive into.

This notional attacking quartet, typically interchanging their roles with both great ease and frequency – Rotation, a key element for Chacho and his side.

Lautaro Martínez pulls wide, the vacuum creates generating a channel for Matías Zaracho to occupy. This interchange in turn leaves the remaining three players Lautaro, Cuadra (Lisandro López’s replacement on the day) & Centurión – are able to attack the penalty area waiting for the cut-back.

An attacking cocktail of width that begets depth

Indeed from an attacking ‘form’, over and above simply a rigid shape, outside of fast transitions, Racing have been comfortable to what for all intents and purposes could be at times viewed in the freeze-frames the game provides as almost a 4-2-4.

One of Coudet’s key attacking tenets has looked in theory to place value in creating numerical superiority; especially in what he views can be the key zones areas of the pitch.

In doing so he has been more than content with committing both the full-backs: Renzo Saravia and Alexis Soto into the attack at the same time. This leading to a somewhat common practice of seeing Alejandro Donatti and Leonardo Sigali one-on-one at the back many times across the space of a typical 90 minutes.

The primary objective of encouraging so many players into attack though, has been to create both Depth – the two forwards pushed right up against the opposition backline. And also Width – by incorporating Zaracho + Centurión, or Saravia + Soto. Ergo in effect an additional two players at or around the same level as the two strikers.

La Academia at times able to aggressively impose a quartet ahead of the ball, in part due to having moved the whole team higher up the pitch in order to be compact enough to aggressively win the ball quickly after it is lost.

Indeed an example of this can be seen in a recent keenly contested fixture against Lanús; the Racing attack covering the width of the Lanús backline. Which in turn forces their opponents to face the game primarily in one direction, dividing the pitch in two.

As a result this facilitates the overload to the oppositions weaker side. Affording the full back on the opposite wing (Soto in this instance) greater space with which to influence the attack, and invariably creating a numerical superiority on the overlapping (blindside) run too.

The indomitable Nery/i’s at the wheel

To be able to attack with such depth, but also find width as Racing have done so far this term, two of Coudet’s newest recruits have undeniably been paramount.

Soon after his arrival there had been a few eyebrows raised at the signing of Nery Domínguez from arch-rivals Independiente. Especially as this had for essentially been to replace a more conventional ball-winning central midfielder, veteran Uruguayan hard-man Egidio Arévalo Ríos.

However, truth be told both the Nery/i’s – Neri Cardozo, Domínguez’s midfield partner and fellow New Year arrival, have moved quickly to quell any misguided fears.

Not only have they reinforced their managers’ belief that rather than require an archetypal midfielder destroyer, the team could recover the ball as a unit. The duo have also been vital in keeping the game moving quickly.

Be it through Domínguez’s drop between the two central defenders to create superiority when bringing the ball out of the back, in what is known in Argentina as La Salida Lavolpiana or via his astute switches of play that afford the side their aforementioned similar attacking superiority.

Or in Cardozo’s case by receiving and playing the simple pass, a penetrative pass inside quickly, looking to break lines.

This has lead to said pairing typically controlling the tempo of their team, whilst acting as a nexus linking the defence to attack, (especially with all and sundry being positioned ahead of the ball/around them.) 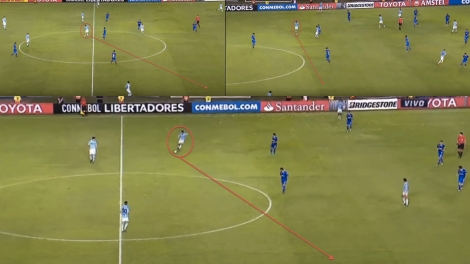 A handful of examples of Neri Domínguez looking to move the ball via a switch of play, quickly and directly to the opponents weaker side/position of numerical inferiority.

An Octopus with a glimpse to the future?

Curiously enough, with the blueprint of Coudet’s Racing now seemingly instilled. A player who could not just change the shape but the style significantly going forward would be the until recently absent through injury Diego González, or El Pulpo – the octopus, as he is also known.

González (if the game against Patronato is anything to go by) will look to add a bit of patience to what has to date been a chiefly direct midfield. in the sense of looking to penetrate early, spearheaded by both Cardozo and Centurión in this respect.

Whereas in the bulk of the games Racing have looked to transition quickly and try to establish/plant both their full-backs up the pitch early, Pulpo gives them the ability to recycle the ball through midfield more often.

Said strategy being to hypothetically incorporate the wide attacking players to arrive in the attack by surprise, rather than fundamentally act as a distraction to generate superiority, as has been the case a great deal until now.

Hence on the evidence so far, it wouldn’t be far fetched to believe that the inclusion of one of the Superliga’s most regarded ‘No.8’s’ will likely see the team look to utilise the third man more in the build up.

Lautaro Martínez’s goal against Patronato. A 20 pass sequence – the biggest of the Coudet era to date – which sees the full-backs arrive patiently into the attack and González playing the killer ball. More to come in the future?

Instead of focusing on a pre-set, niche/formation, and a default dogmatic setup to go with it, Coudet has designed an imposingly well drilled, flexible Racing side.

Not for nothing since taking over they’ve adopted game elements on a multitude of levels, be it from set-piece situations: an auspiciously consistent *8* goals in the just nine games in 2018 so far.

All the way through to some very simple positional rotation, and interchange concepts, that have been absorbed and executed impressively.

Chacho has played to the strength of his players and their characteristics but given them a framework with which to exploit these better. It is precisely this variability, from a team that can play direct, so as to transition aggressively with numbers ahead of the ball (which at times even provides a bit of a chaotic impression).

Ranging to another that that can build patiently looking to move ball and opponent to generate superiority. All encompassed under an innately attacking ethos that could well stand Coudet’s side well if not just in the league, but also in their Copa Libertadores quest.