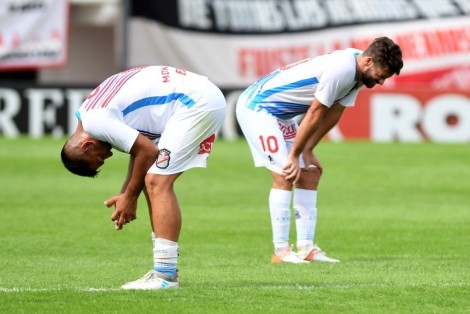 Sixteen years ago, Arsenal de Sarandí, the club founded by former AFA president Julio Grondona in 1957, reached the top tier of Argentine football. With one of the most powerful men in world football watching over them, Arsenal enjoyed a period of great success winning the Copa Sudamericana in 2007 and the Primera title in 2012. But with Grondona passing away four years ago, Arsenal’s decline has been sharp and on Sunday, relegation from the Superliga was confirmed.

Arsenal have been Nacional B-bound for months but showed an almost uncharacteristic fight to claw their way back from two-down against relegation rivals Chacarita Juniors to claim a point.

However, their fate was merely delayed a couple of hours as Patronato hosted Rosario Central and cruised to a 3-0 win leaving Arsenal adrift in the descenso table and the first side guaranteed to be relegated.

Arsenal’s lack of goals has been a problem for several seasons now and after Leonardo Rolón rattled the crossbar and a couple of other clear chances were wasted in Villa Maipú, Chacarita Juniors punished them, Germán Re and Mauro Matos heading goals either side of half time.

However, the visitors continued to attack and even after Lucas Wílchez missed from the penalty spot, Claudio Corvalán and Sebastián Lomónaco rifled the ball past Pedro Fernández to draw level. Unable to find a winner, attention then turned to Paraná.

There was a glimmer of hope that Patronato wouldn’t secure victory with leading scorer Sebastián Ribas still ruled out through injury but it proved to make little difference.

Matías Garrido headed Patronato in front early and with Central rarely looking like getting back into the game it was little surprise when Matías Quiroga tapped in a simple second after half time.

Quiroga nodded the ball down for Adrián Balboa to add a third and with that victory was not only confirmed but Arsenal’s relegation too. Given the club’s affiliation with Grondona and the assistance that this provided over the years, there were few tears shed in Argentine football.

In the early Sunday kick-off, River Plate extended their Superliga winning streak to three with victory over Defensa y Justicia in Florencio Varela.

It was the hosts that started better and when Fernando Márquez tapped in a simple opener after ten minutes it looked as though River might be slipping back into the poor form that plagued them for months.

However, River began to increase the pressure and after Rodrigo Mora managed to hit the crossbar from only yards out, Marcelo Gallardo’s side were soon level. Gonzalo Martínez’s shot deflected wide off an arm allowing the attacking midfielder to beat Ezequiel Unsain with the resulting penalty.

Heading into half time level, Javier Pinola stabbed in a scrappy second and with River taking the lead into the break, they rarely looked in danger thereafter.

Record signing Lucas Pratto thrashed in a third shortly after the restart and while River couldn’t extend their lead the victory was never really in doubt.

The victory still leaves River a couple of points shy of the Copa Sudamericana places but with six matches remaining, Los Millonarios have built up some momentum.