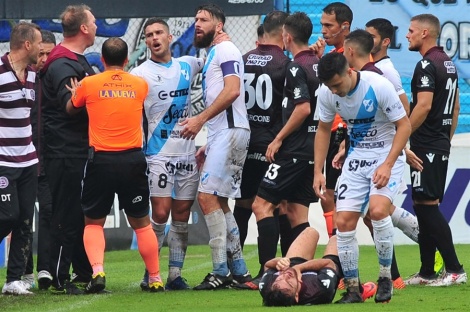 “The referees are a disaster.”

Lanús forward Lautaro Acosta had some choice words for the officials after Temperley secured an injury time point on Saturday afternoon that left El Granate fuming but did little to improve the home side’s situation of impending relegation.

Only a miracle will save Temperley now and given that a soft last minute penalty was needed just to take a point from a ten-man, out of form Lanús side it is perhaps clear that relegation is deserved.

Lanús were reduced to ten men after 35 minutes after Enzo Ortíz was shown a second yellow card for a pull on Fernando Brandán and when the same Temperley player poked the home side ahead from the resulting free-kick it looked as though three points would provide supporters with a little hope.

However, the game’s first incorrect penalty decision gifted Lanús an equaliser as referee Facundo Tello penalised goalkeeper Josué Ayala despite clearly getting the ball and Bruno Vides slotted in from the spot.

Lautaro Acosta tapped ten-man Lanús ahead shortly after half time and it looked as though that would seal it but deep in stoppage time, Tello spotted what he judged to be a handball despite it hitting Germán Denis’ shoulder with his arm down to his side. Lanús raged, Denis was sent off for his protests and Brandán scored his second of the game to earn a point.

Temperley remain a long way from safety and their relegation is simply on ice.

In what could be a key result in the race for 2019 Copa Sudamericana qualification, Rosario Central defeated Belgrano 2-1 in the Gigante de Arroyito and in the process leapfrogged their visitors in the table.

Defender Oscar Cabezas’ fine diving header gave Central a 35th minute lead and with Belgrano still adjusting to falling behind, it was swiftly doubled. Goalkeeper Lucas Acosta spilled a shot from distance and Fernando Zampedri reacted quickly to tap in the rebound.

Belgrano had their chances in the second but having to wait until stoppage time for Cristian Lema to score from the penalty spot it was too late to stage a comeback.

Central are ahead of Belgrano in the table only on goals scored and both sides are a point adrift of the last Copa Sudamericana spot.

Referee Andrés Merlos called off Colón’s clash with Vélez after only 22 minutes after a third firecracker exploded 0n the pitch. The second had already landed close to Vélez goalkeeper César Rigamonti and with supporters showing no signs of stopping, the decision was made to halt proceedings.