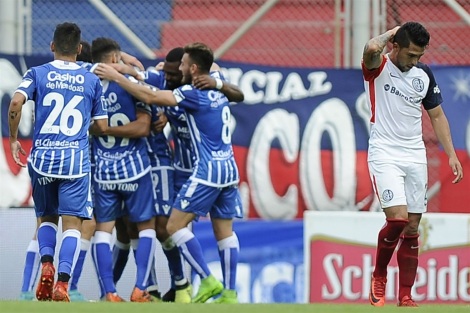 San Lorenzo’s resiliant display and victory over Independiente in midweek coupled with Boca Juniors surprise defeat to Defensa y Justicia meant that the Superliga title was back on. At least for less than 24 hours anyway, as Los Cuervos hosted Godoy Cruz early on Sunday morning and were emphatically beaten 5-0 at the Nuevo Gasómetro.

Claudio Biaggio’s side boasted the best defensive record in the league prior to the game and hadn’t given up hope of catching Boca but Matías Caruzzo’s own-goal inside the opening ten minutes set the tone for a disastrous 90 minutes.

Tomás Cardona headed a second, unmarked at a corner from just a few yards out and when Santiago Garcia nodded in a simple third still with only 18 minutes on the clock, there was a sense of bemusement among the San Lorenzo players and all those watching.

Even the three early goals didn’t serve as a wake-up to San Lorenzo as Luciano Abecasis’ long range effort slipped through the fingers of Nicolás Navarro to give the visitors an astonishing four-goal lead at the break.

With the game already over, Santiago Garcia slid in a fifth for good measure and with it joined fellow Uruguayan Sebastián Ribas at the top of the Superliga scoring charts, but it is Godoy Cruz manager Diego Dabove who deserves most of the credit.

San Lorenzo’s title challenge may have imploded in spectacular fashion on Sunday but El Tomba hadn’t won away all season until Dabove took over at the start of the year. Now, not only have Godoy Cruz not lost but they have now won three on the bounce and taken 28 points from a possible total of 33 to sit second, well on course for Copa Libertadores qualification.

In San Juan, Huracán took another step towards 2019 Copa Sudamericana qualification and could yet sneak a Libertadores spot after a narrow victory over San Martín.

El Globo needed a little bit of luck to keep the hosts at bay and after referee Darío Herrera waved away a couple of decent penalty shouts by San Martín, he balanced things up with an incorrect red card for Hugo Nervo. However, Huracán hung on and so Nicolás Silva’s fine individual effort midway through the first half proved to be the match winner.

And in Tucumán, youngster Joaquín Varela struck deep into stoppage time to salvage a point for Newell’s Old Boys against Atlético.

Gervasio Núñez’s shot through a crowded penalty box had looked to have given the home side the points but after Newell’s striker Luis Leal had crashed a shot against the bar and had another cleared off the line, La Lepra will feel that Varela’s equaliser was deserved.