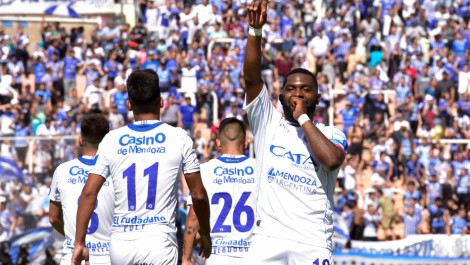 This season’s relegation battle has been without surprise and after Arsenal’s fate was sealed two weeks ago, Temperley and Olimpo finally joined them on Saturday after defeats to Godoy Cruz and San Martín respectively.

Temperley needing something from their trip to Mendoza to face a Godoy Cruz on a five-match winning streak always looked like the nail in the coffin and so it proved as El Gasolero were soundly beaten.

The home side were dominant from the off and when Agustín Verdugo’s cross from the right was missed by everyone, including the in-form Santiago García, it drifted past Josué Ayala into the net.

Despite trailing by only one at the break there was a sense that the game was over already and the question was simply when Godoy Cruz would score next.

The answer coming in the 52nd minute when García turned Gastón Aguirre with ease to rifle his 12th of the season and sit top of the scoring charts.

The Uruguayan’s 13th swiftly followed after Ayala’s weak punch fell at his feet and with the comfortable victory, Temperley’s stay in the top flight was brought to an end. With three wins all season and the worst defensive record, no one could argue it isn’t deserved and certainly Godoy Cruz were far too good.

El Tomba are now four points behind Boca and with Copa Libertadores football almost secure, Diego Dabove’s side will be keeping an eye on events in Avellaneda on Sunday evening – a Boca defeat to Independiente may yet create an interesting run-in.

Olimpo will be joining Temperley in the Nacional B next season after the Aurinegro slumped to defeat against San Martín in Bahía Blanca.

Ten defeats in the last twelve games Olimpo’s relegation has hardly been contested but the loss to San Martín was decided by relatively fine margins.

The visitors led from the spot after nine minutes as Luis Ardente made no mistake in breaking the deadlock and it wasn’t long before Olimpo had a chance to equalise.

Referee Pablo Echavarría pointed to the spot for the second time after a pull on Leandro Lacunza’s shirt but after scoring already himself, Ardente guessed correctly to keep out Emiliano Tellechea’s firmly struck effort.

Unable to find that vital goal, San Martín ensured victory with another penalty late on, this time converted by Barceló and with it Olimpo were gone.