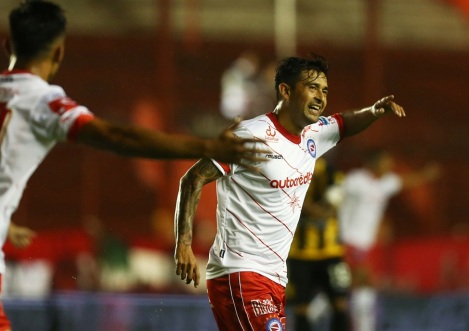 Argentinos Juniors may have been satisfied with simply securing their Superliga status in their first campaign back in the top flight but with victory over Olimpo, one of the already relegated sides, Los Bichos are closing in on possible continental competition.

Leonardo Pisculichi’s early goal gave Argentinos Juniors all three points and moved Alfredo Berti’s side up into seventh and two points behind Talleres in the fifth and final Copa Libertadores spot. Admittedly in what is an incredibly tight league table, all that could change over the course of the weekend.

Regardless, Argentinos Juniors are in a good position to seal a Copa Sudamericana spot and deservedly so after another win in La Paternal.

Pisculichi’s well struck shot from outside the box looked as though it would set up an easy win for the home side but Olimpo gave a good account of themselves and could have easily nicked something.

However, Los Bichos move on and will still need to secure some more points from the final three rounds to guarantee a place in the Sudamericana.

Later in La Plata, Belgrano also moved into the Copa Sudamericana places with a narrow win over an under-strength Estudiantes side.

The hosts are themselves in contention for those same positions but their current priority is this year’s Copa Libertadores and ahead of a critical game against Santos, Lucas Bernardi rested several players.

Despite this, there was little between the two sides and the game’s only goal came just after the hour mark when Mauro Guevgeozian poked the ball past Mariano Andújar after being left unmarked at a corner.

Belgrano climb to eighth with victory but could find themselves back down in 14th by the end of the round.