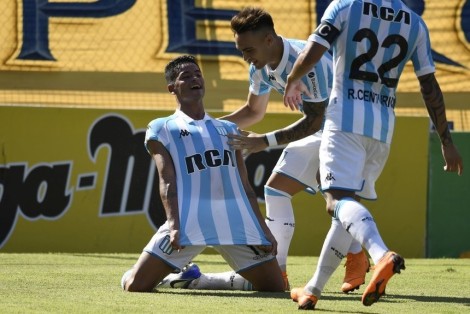 Absolutely flying in this year’s Copa Libertadores, consecutive defeats look to have dampened Racing Club’s chances of qualifying for next year’s tournament via the league but that didn’t stop Eduardo Coudet’s vibrant, young side picking up a valuable win away to Rosario Central on Sunday.

Coudet, a favourite from this time at Central was honoured before kick off, and despite making a slow start his new Racing side eventually clicked into gear.

A game of few clear chances sparked into life just after the hour mark when the impressive Brian Mansilla led a swift counter towards the Central penalty area. The 21-year-old had plenty of options but opted to go for goal from distance and his decision was vindicated when his left-foot shot nestled in the top corner.

The Newell’s supporter certainly enjoyed his goal and were it not for Racing’s strength in attack, a talent like Mansilla’s would surely be seeing plenty more action.

By this point Racing had introduced Lautaro Martínez and the striker showed once more just why he is the most highly regarded youngster in Argentina with a superb goal. The 20-year-old’s strength and tenacity won the ball on half way and his pace took him away from two defenders before finding the bottom corner with an off-balance finish.

Many people might still be wondering how this unproven youngster could be included in Argentina’s World Cup squad but those doubters will likely find out very soon, if not in Russia but when El Toro completes his move to Inter.

The club currently occupying fifth, at least until Independiente play on Monday, are Huracán after El Globo chalked up a third straight win away to Tigre.

With relegation avoided for this season Tigre are already in the midst of next season’s battle but were unlucky not to be ahead when Jacobo Mansilla’s shot crashed against the crossbar.

It proved to be a decisive moment as soon after Huracán’s route-one approach from Marcos Díaz’s long punt upfield caught Tigre cold allowing Nicolás Silva to smash the ball past Julio Chiarini.

Despite going behind Tigre continued to be in the ascendency but their lack of a goal scorer has been an achilles heel for a long time now and as Díaz thwarted every attempt on his goal, Huracán doubled their lead. Chiarini could only parry Mauro Bogado’s free kick and Carlos Araujo slid in the rebound.

While Tigre remain in grave danger, Huracán’s form has pulled them well clear and could yet land them a place back in the Copa Libertadores.

Atlético Tucumán secured a historic Copa Libertadores win in La Paz during the week so could perhaps be excused for a slightly underwhelming display against Unión.

Neither side really fashioned much in the way of clear chances with Unión’s Diego Zabala spurning the best opportunity late on in this goalless draw. Ordinarily a point in Tucumán wouldn’t be a bad result and while Unión remain in the Copa Sudamericana spots, such is the level of competition dropping two could prove costly.