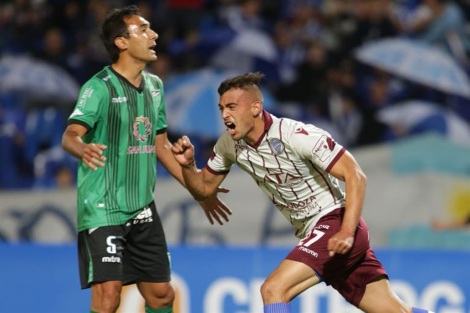 The title race will, mathematically at least, go on until next weekend after Godoy Cruz closed the gap on Boca Juniors to three points with victory over San Martín in the Clásico de Cuyo.

Only Racing Club have left Mendoza with anything this season and so despite Godoy Cruz’s draw away to Banfield last week, El Tomba were overwhelming favourites on Friday evening.

And it didn’t take long for that superiority to tell with Victorio Ramis heading in unmarked from a corner after 13 minutes.

Uruguayan striker Santiago García said in an interview this week that he would be playing at the 2022 World Cup and just after half time, the Superliga’s leading scorer nodded his 14th goal of the campaign.

San Martín saw Claudio Mosca and Matías Escudero sent off late on as Godoy Cruz cantered to victory and while it surely only delays Boca Juniors’ title celebrations, El Tomba qualifying for the Libertadores and forcing the defending champions into the penultimate weekend is achievement in itself.

Earlier in Villa Maipú, Temperley defeated Chacarita Juniors in a match between two of the Superliga’s already relegated clubs.

More dreadful defending allowed Santiago Giordana to poke in a second shortly before half time and if ever there was evidence as to why Chacarita Juniors were making a swift return to the Nacional B, it was the opening 45 minutes.

Temperley were reduced to ten men with twenty minutes remaining as goalscorer Delgado tussled with Germán Ré off the ball.

A sensational long range strike by Federico Rosso reduced the deficit but Temperley held on for what could be a last three points in the top flight.